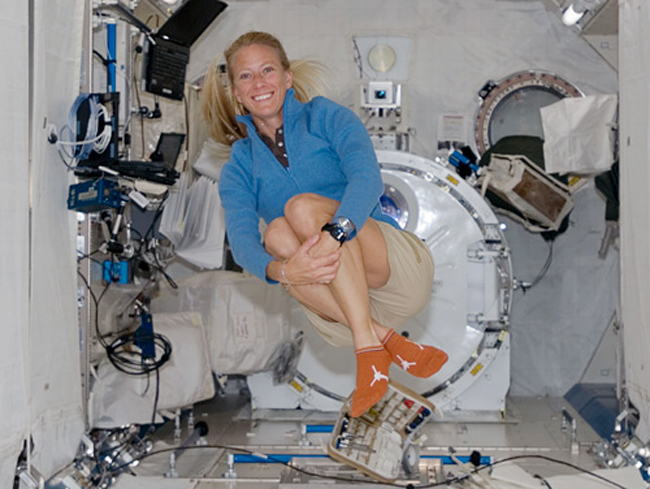 Karen Nyberg shows off her Longhorn socks on her first mission, STS-124, in 2008. It was on this mission that Nyberg became the 50th woman in space (Photo courtesy of NASA).

UT alumna Karen Nyberg is set to launch aboard the Soyuz TMA-09M spacecraft from the Baikonur Cosmodrome in Kazakhstan at 3:31 p.m. CDT today.

Nyberg attended graduate school at The University of Texas at Austin's Cockrell School of Engineering and received her master's and doctorate degrees in mechanical engineering in 1996 and 1998, respectively. She is a member of the Expedition 36 crew which also includes Soyuz Commander Fyodor Yurchikhin of the Russian Federal Space Agency (Roscosmos) and European Space Agency (ESA) astronaut Luca Parmitano.

The Expedition 36 crew will be taking a new one-day route to the International Space Station (ISS), attempted only once before by a manned crew during Expediton 35 in March. What was once a two-day journey, will now take the crew about six hours. The crew will dock to the space station at 9:16 p.m., and they will open the hatch and enter the space station at 10:55 p.m. Both events will also be broadcast live on NASA TV.

Nyberg, Yurchikhin and Parmitano will join NASA astronaut Chris Cassidy and Cosmonauts Pavel Vinogradov and Aleksandr Misurkin for a six month stay aboard the ISS.