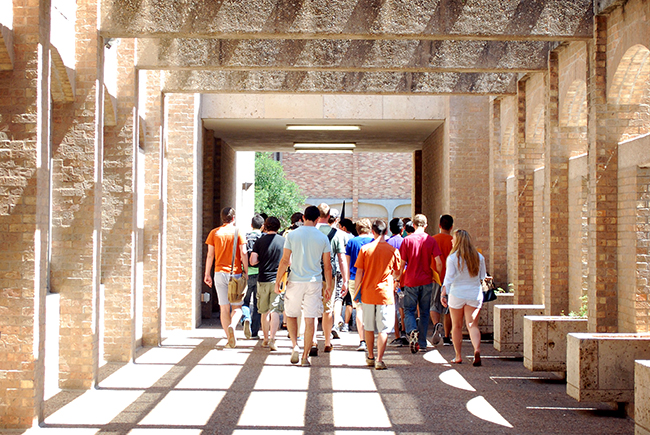 Editor’s Note: Serrano worked for the Office of New Student Services from 2011-2012.

The Daily Texan spent 12 hours with the students during their stay on campus and selected the most exciting hours over the first three-day session for this story.

Carrying suitcases, blankets and pillows, about 1,110 new students took their first steps on campus at the Jester Residence Hall.

Orientation officials said students and their families began showing up at 6:30 a.m. for the 7:30 a.m. check-in. During orientation, students meet their academic advisors, learn more about their colleges and register for classes.

Cristi Biggs, the assistant dean of students who oversees orientation, said the best thing students can do is take advantage of the opportunities available at orientation, such as going to optional programs on improving their first-year experience.

“You can go out to eat with your family and friends at any time,” Biggs said. “This is dedicated to your preparation for college.”

Orientation adviser Christina Ramirez reported to her post at the Brazos Garage at 6 a.m. Wednesday with a smile on her face. Her assignment — greeting people when they arrived at UT.

“When students hear that first, ‘Welcome to UT-Austin,’ you can see it on their faces,” Ramirez said. “They’re so excited.”

Ramirez spent all semester getting ready for summer orientation. Orientation advisers are required to take a preparation class at UT and create programs for new students on campus safety and social justice.

Ramirez said her work actually began Tuesday when she went to the store to buy candy for the group of students she would mentor, reviewed her orientation duties and laid out her uniform.

“We get to be like the cheerleaders,” Ramirez said.

UT graduation rate champion David Laude encouraged new students from the Class of 2017 to see UT as a partner in helping them graduate in four years.

“Most of you think, ‘I’m going to graduate in four, maybe even three years,’” Laude said. “The thing is, that doesn’t just happen. You don’t just roll the ball out and there it is. It actually takes a lot of planning.”

Laude spoke at the mandatory orientation program Wednesday. At the session, officials gave students specific steps they could take to graduate in four years.

Representatives from UT’s Greek community had one message for new students attending orientation: Sorority and fraternity life is not all about partying.

Greek organizations completed more than 80,000 community service hours on campus, according to UT. There are more than 5,000 members involved in Greek life at UT.

“I just hope that [new students] at least scratched the surface of Greek life,” Hernandez said. “See where they would fit.”

The courtyard in front of the Jester Residence Hall resembled a battleground Thursday. Students yelled, strategized and faced off against their friends in a game of dodgeball.

UT orientation advisers said about 100 students showed up for the dodgeball games held Wednesday and Thursday.

Mario Duran, an orientation adviser supervising the game, said events such as these are important for creating a balance between work and fun during orientation.

“A lot of time when students play sports they get more comfortable with each other,” Duran said. “It builds friendships that could possibly be renewed when they come back to the University.”

As the clock counted down to registration, chemistry freshman Taylor Castillo could her feel her heart racing. Finally, it was time.

“You could hear all the crowd saying, ‘I got in, I got in,’” Castillo said, referring to students who were able to register for certain classes.

New UT students registered for classes Friday. Students who were not able to get into the classes they wanted will have another chance to add and drop courses in August.

Castillo said she is excited to come back to UT in the fall.