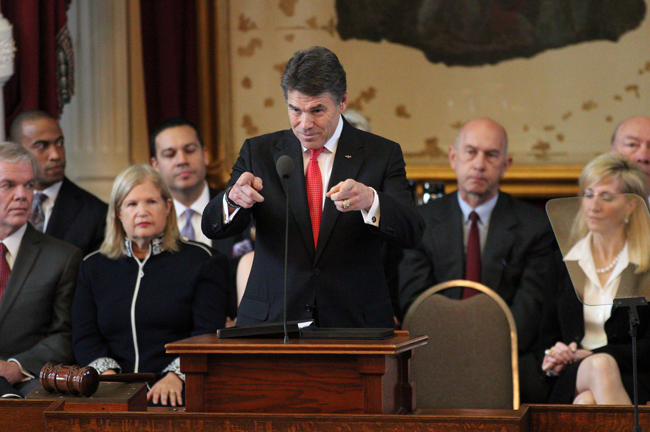 Gov. Rick Perry talks about fixed four-year tuition rates during his State of the State address at the Capitol in January.

Gov. Rick Perry vetoed a key bill that would have restricted the responsbilities and power of the UT System Board of Regents in a slew of bill killings Friday.

Perry vetoed more than 20 bills, including one that caught fire this session and would have prevented UT Systems regents from being too involved in University decisions. The governor also vetoed a bill that would have given the UT Center for Mexican American Studies $1.5 million in additional funding for 2013-2014.

The Daily Texan will be updating this post throughout the weekend with updates on the governor’s vetoes and what Texas and UT officials are saying about them. Follow us @thedailytexan for live updates and tweet us if you have anything you want to say.

Click here for a brief on the veto on SB 15, the bill that would limit the responsibilties of the UT System Board of Regents.

Click here for a brief on the veto on the line item in HB 1025, which would have provided $1.5 million in additional funding for the UT Center for Mexican-American Studies.

Click here for a brief on two regent-targeted amendements that survived Friday. These amendments would limit the ways the UT System Board of Regents can spend money.