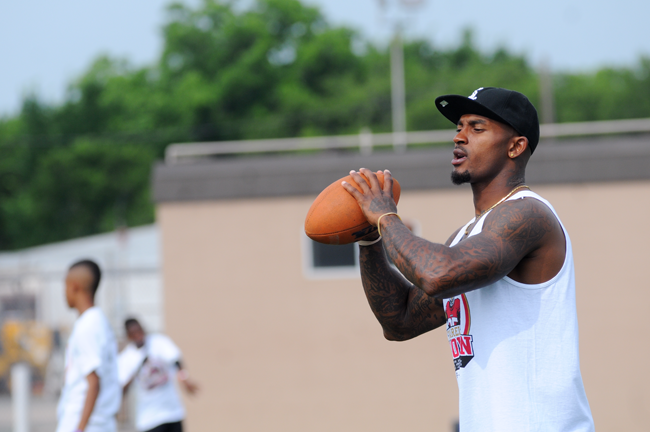 Tarell Brown instructs at his football camp in Mesquite, which was free for all participants. A national champ at Texas, Brown started in the Super Bowl last season and is one of many former Texas defensive backs to be drafted recently. " />

Tarell Brown instructs at his football camp in Mesquite, which was free for all participants. A national champ at Texas, Brown started in the Super Bowl last season and is one of many former Texas defensive backs to be drafted recently.

Tarell Brown shakes dozens of hands and signs hundreds of autographs after running his sixth football and cheerleading camp in Mesquite since beginning his NFL career. He’s joined by former Longhorns teammates Michael Griffin, Michael Huff and Aaron Ross – four of the 13 Longhorns defensive backs that have been drafted since 2002.

“It’s a fraternity,” Huff said. “At Texas, us DBs pride ourselves in being a family and keeping the tradition going. Any time one of our DBs have something going, we’re going to be there.”

After spending an hour signing autographs for the throng of adoring young campers, Brown, Huff, Ross and Griffin proudly put on shirts that proclaimed: “Texas Football is the new DBU.”

Brown has done a fine job upholding that “DBU” legacy but his path to success hasn’t always been a smooth one. He partially tore his ACL after his rookie season and spent his first four years in the NFL as a backup.

But possibly his most painful setback came while he was still playing for Texas, who he helped win its first national championship in more than three decades in 2005.

One of two Heisman Trophy winners for USC, Matt Leinart went into the fourth quarter of that season’s national title game without a touchdown pass.

That changed with 6:42 left, when he threw a dart between Texas safety Michael Griffin and cornerback Tarell Brown. Dwayne Jarrett rose over Brown and Griffin, plucked the ball out of the air as the two defenders collided and his outstretched arm crossed the goal line.

USC took a 38-26 lead over Texas while Griffin and Brown lay limp next to each other at the 5-yard line. Griffin was fine, but Brown, who made a career-high 10 tackles in that game, had suffered a broken right forearm. He was forced to watch Vince Young lead the Longhorns to a scintillating 41-38 victory on the television in the locker room.

“I was going for the ball and I just got hit. That’s all I really remember,” Brown said. “I remember breaking my forearm and my whole right side going numb. I knew something was broken. We did a great job finishing the game off.”

Eight years later, Brown had a much different championship experience. After earning a starting spot at cornerback for the San Francisco 49ers before the 2011 season, Brown had helped them reach their first Super Bowl in nearly two decades.

Brown, who the 49ers drafted in the fifth round of the 2006 NFL Draft, was part of a secondary that boasted the fourth-best pass defense in the league. But Baltimore Ravens quarterback Joe Flacco had picked it apart to the tune of three first-half touchdown passes.

The 49ers picked apart at a 28-6 Ravens lead in the second half and got as close as 28-23 after Brown forced a Ray Rice fumble, which led to a David Akers field goal. But San Francisco was never able to break through, falling to Baltimore, 34-31, in Super Bowl XLVII this February.

“There’s nothing like playing in the Super Bowl,” Brown said. “It’s all about winning. I remember the national championship a lot more because we won. The Super Bowl was great, getting the opportunity to represent your team, yourself and your family. We had a great run. We just couldn’t finish it at the end.”

Brown has come a long way since since starring at North Mesquite High School, where he rushed for more than 3,000 yards in his last two years and established himself as one of the top cornerback prospects in the country.

He returned to Mesquite last weekend for his camp, which he doesn’t charge for because he couldn’t afford to go to such camps as a child.

“I always thought it was something important for my community,” Brown said. “This was always big for me, always something I wanted to do, just to give something back to the kids.”

Maybe next year, he’ll come to the camp wearing a Super Bowl ring.