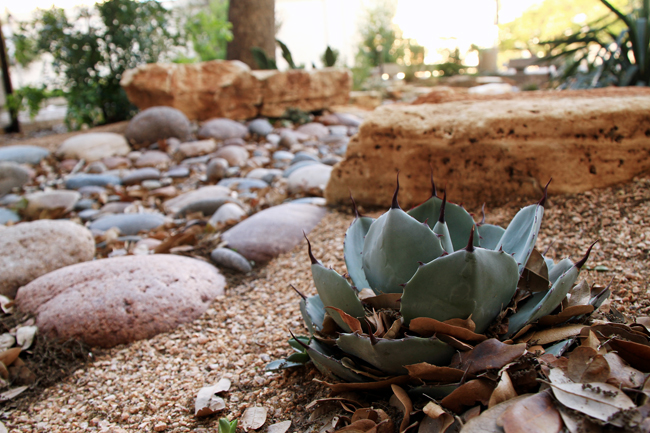 UT landscapers are looking towards xeriscaping, a process in which landscapers replace grass with low-water plants or stone to reduce the usage of water needed to maintain the gardens.

Instead of the brown grass and dry, cracked earth that usually accompany Texas  summer, Austin is instead saturated with a deep, dark green – an effect of the downpour Central Texas received at the end of May. Though the grass may be greener, the drought is worse than ever.

The drought that has plagued Texas since late 2010 continues to take its toll on the state’s water supplies, reducing inflows into Central Texas reservoirs to levels just above those experienced during the heat wave of summer 2011. These conditions have prompted Texas Gov. Rick Perry to extend the Emergency Disaster Proclamation Monday, which was originally issued in 2011 responding to the drought. Perry also recently signed a series of bills aimed at fostering water conservation and reuse.

“They restructure the Water [Development] Board and effectively double the funding that can go toward conservation and reuse,” Metzger said. “All in all, it’s a pretty significant achievement for water conservation.”

During bill-signing in late May, Perry said the laws will help ensure the state remains economically viable in the face of a population boom that is projected to continue in the near future.

“We’re securing the future of our great state by making sure that Texas has the water it needs for decades to come,” Perry said in a statement.

The provisions include two billion dollars allocated for water-related government projects and encourages city and state officials to prioritize efficient use of water resources.

Dan Yates, supervisor for the River Operations Center at the Lower Colorado River Authority, said the combined capacity of Lakes Buchanan and Travis, which make up most of the Austin area’s water supply, has decreased by 21 percent in the past two years alone.

One of the bills signed by the governor targets homeowners associations, making it illegal to prohibit xeriscaping, which is the practice of planting gardens using native, drought-resistant plants and limiting plant material, reducing the need for irrigation.

Stacy Pandy, Water Conservation Coordinator for the Lower Colorado River Authority, said that there are many ways individuals can help save water, including waiting to plant gardens until the fall and cutting down on outdoor water waste.

“During the summer, the most important thing is outdoor irrigation,” Pandy said. “Make sure you don’t have any broken sprinkler heads or leaking outdoor faucets and adhere to the mandatory watering schedule.”