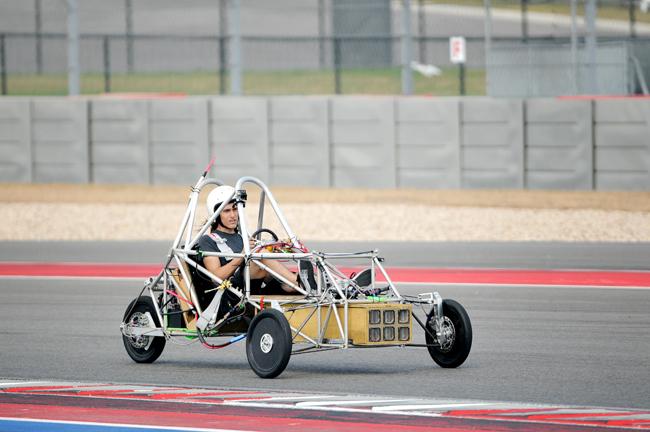 The UT Solar Vehicles Team has been working on its solar car, the TexSun, for two years. The car cost $100,000 to build. The team will compete against other college solar car teams nationwide at the International Formula Sun Grand Prix in June.

Two years and thousands of dollars later, the UT Solar Vehicles Team is geared up and ready to race its car, called the TexSun, at the Formula Sun Grand Prix this week.

Beginning Monday and ending Saturday, the Formula Sun Grand Prix features solar cars built by college students nationwide. The winner of the race is not the car that passes the finish line first, but the car that completes the most laps without running out of power.

The race will be held at the Circuit of the Americas racetrack, which hosted the U.S. Formula 1 race last year. There are 12 teams registered to compete.

UT students who worked on the car say building it gave them the opportunity to use the skills they learned in class. Building the car is not cheap, and students faced challenges buying parts for the car.

Overall, students say the spotlight is on renewable energy. If solar energy can be harnessed to make cars run, renewable may eventually go mainstream and be used in aspects of everyday life.

“I like a challenge,” said team member Benton Greene, an aerospace engineering graduate student. “It is fun to design something, to meet some problem and see it actually work and get to compete against other people who designed for the same problem but had different creative ideas for how to make things work.”

The UT Solar Vehicles Team is made up of 50 students who worked on the car’s mechanical, battery, electrical, software, and body and wing teams. The team spent $100,000 constructing the car, said Neda Abdul-Razzak, the team’s president and a mechanical engineering and psychology senior.

“To be able to finish making the car is itself a huge accomplishment,” Abdul-Razzak said. “The main thing is that it is a learning process and a really good way to apply all the engineering theories we learn in the classroom by building an actual car.”

Built low to the ground, made of aluminum and mounted with a solar panel, the UT car weighs slightly less than 200 pounds. Computer systems, including a user interface and battery protection, are also used to conserve energy while the car is not in motion.

Abdul-Razzak said the first four days of the race are dedicated to scrutineering, a process where officials test the car and make sure it is up to safety regulations. The on-track competition takes place the last three days. The teams charge their solar panel twice a day at a specific angle so that the sun directly hits the components of the solar panel that convert solar energy to electricity. The car runs as long as the battery packs last.

The team got a significant donation from a UT alumnus to finish the TexSun. Bobby Epstein, chairman and founding partner of the Circuit of the Americas racetrack in Austin, contributed $50,000 to the UT Solar Vehicles Team.

Team members said the money was used to buy the most expensive and critical components of the car, including the carbon fiber, the solar panel array and motor.

Budget, unfortunately, often plays a significant role in the outcome of a car, Epstein said. Because of this, he said the solar car challenge has much in common with Formula 1 races because car design, rather than driver, is often the key factor in determining victory.

“I visited the workshop where the UT car was under construction, and I was impressed by their enthusiasm and depth of understanding,” Epstein said. “I also am certain there is no waste and that resources are maximized.”

Win or lose, at the end of the day the purpose of building the TexSun was to promote research into the use of renewable energy, Greene said.

“This event is a way to get more local people to learn more about solar energy and hopefully consider installing solar panels in their house,” Greene said. “Get the word out for green energy.”