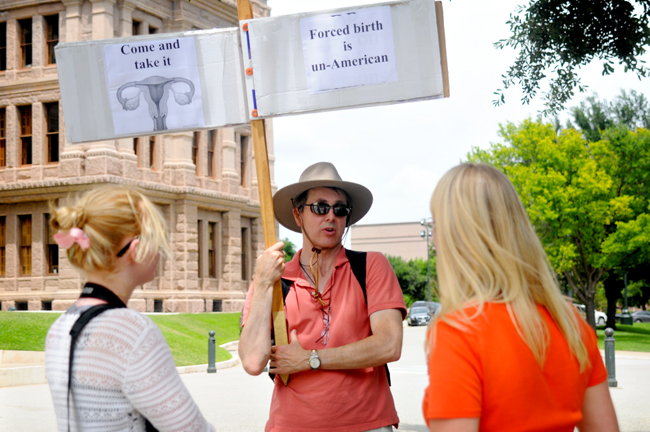 Editor's Note: This piece is one in a series of op-eds written by UT students that The Daily Texan will be publishing in response to the ongoing debate in the Texas Legislature over enacting stricter abortion regulations.

Along with hundreds of other Texans, I spent the last four days fighting a battle that was supposedly won 40 years ago. From early yesterday afternoon when the gallery doors opened until 5 a.m. this morning when the House adjourned, more than 1,000 men and women in orange “Stand with Texas Women” shirts flooded the Capitol in protest of a bill, Senate Bill 5, the passage of which could potentially result in a drastic reduction to abortion access in our state.  We poured into the gallery, streamed across three levels of Capitol balconies and filled the rotunda floor. Signs read “Pro-life men, let us know when you get pregnant” and chants echoed, “What do we want? Choice! When do we want it? Now!”

Below the crowds in the gallery, Democratic legislators on the House floor fought brilliantly for 15 hours to stall SB 5 from a vote.

Despite the overwhelming opposition to the legislation demonstrated by protesters, the restrictions passed through the House. In the regular legislative session that ended May 27, versions of SB 5 were introduced but were unable to gain the required two-thirds support of legislators. However, the rules of the special legislative session, which Gov. Rick Perry called immediately after the regular session, require only a simple majority to pass a bill. The fact that this bill is even on the special session agenda highlights the politicized maneuvering that dominates what should be a private and personal issue. By introducing them in the special session, which was supposed to be dedicated solely to redistricting, Perry and Lt. Gov. David Dewhurst (who encouraged the governor to put abortion issues on the call) have made an egregious assault on women’s health to win the favor of right-wing conservatives.

SB 5 would close 37 of 42 abortion clinics in the state due to unnecessary requirements not imposed on other medical facilities. It would also ban abortion after 20 weeks, despite the lack of medical consensus on whether fetuses can feel pain at this point in their development. Under the guise of women’s health, conservatives would force thousands of women to resort to unsafe measures for a legal procedure that a woman has not died from in Texas since 2001. And these restrictions will not affect all women equally. Rural, low-income women who already have little voice in our political system will have even more of their rights stripped from them. Democrats attempted to add amendments to exempt rural areas and cases of rape and incest from the bill, but these were voted down by House Republicans.

While the show of numbers at the Capitol Sunday was more than impressive, the committee hearing on the bills Thursday evening was perhaps the most impactful. That night, 700 people registered to testify against several bills that would limit access to abortion, including House Bill 60, House Bill 16 and Senate Bill 5, in a citizen filibuster aimed at postponing the committee’s vote. (SB 5 was the only bill to be voted on in time to be considered in the Senate, which must re-approve the version of the bill submitted by the House before the bill can be made into law.) Some of the women had been there since 1 p.m. — when the hearing was scheduled—and stayed until 3:45 a.m., when the committee chair ended the testimony on the basis that the it had become “repetitive” and “unhelpful.” These women’s testimonies were fiery, emotional, impassioned, personal, logical and apparently had no effect on the committee’s decision. The next day, the chair called a closed meeting and the committee voted in favor of the bills, 7-2.

I arrived at the hearing late in the evening fully expecting not to have a chance to talk. After all, I had friends who had signed up when registration started at 5 p.m. who had still not spoken. In a wildly unfair system of calling witnesses alphabetically by last name, I was called to testify at about 10:30 p.m. (yes, they were only on last names beginning in “C”). I was nervous, and felt a twinge of guilt. I spoke after people who told of being raped and becoming pregnant, of those who simply could not afford to have a child, for whom abortion was the only way to go forward with their lives. My good friend told the story of how a man tried to “correctively rape” her in attempt to make her heterosexual. Had he been successful and had she become pregnant, she knows she would have wanted an abortion.

My words were not exceptional. I spoke not as someone with personal experience on this issue, but as a college-age woman with her life ahead of her who does not want her choices taken away.  Yet maybe the point is that this bill would affect women like me: You do not have to be exceptional to be affected by this legislation. Roughly one-third of women in the U.S. will have an abortion in their lifetime. That our legislators, especially female legislators, cannot put themselves in the position of women in desperate situations is frustrating and sad. As SB 5 faces the next round of politicking with a filibuster by the Democratic Senators, we can continue to show our opposition to the bill through calls, letters and our presence at the Capitol. With any luck, legislators will recognize their actions for what they really are: regressive, unnecessary and harmful to the women of Texas.

Corley is a Plan II honors senior from Allen.