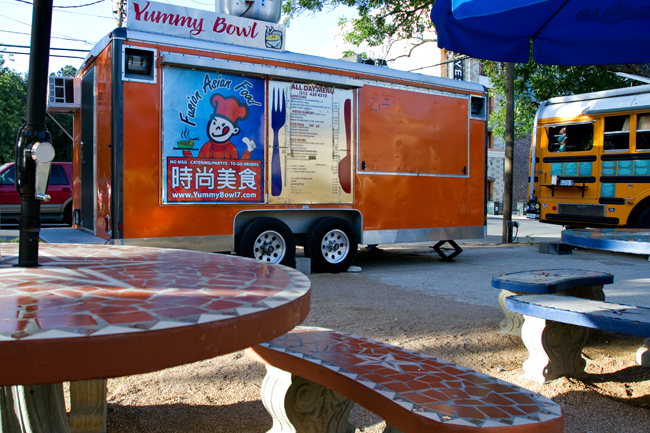 Rancho Rio Eatery, the food truck park in West Campus, will surprise students with three new food trucks when they return to Austin from summer break.

Despite a slow summer, Andy Osborn, the co-owner of the Rancho Rio Eatery food truck park, said he has been receiving three to four phone calls every day, inquiring about vacancies for trailers in the food park. This demand and competition to locate in Rancho Rio Eatery has also increased because the shutdown of the iconic South Congress food truck park for construction of new developments.

“Since South Congress is about to close, many food trucks are looking at Rancho Rio Eatery because it is an upscale food park,” Osborn said.

Osborn said the Rancho Rio Eatery is characterized by a prime location in the heart of UT’s West Campus, cleanliness, low to the ground power outlets, free Wi-Fi and other aspects that appeal to students.

One of the three upcoming food trucks is Julie’s Homemade Noodles, also called Yummy Bowl. Yummy Bowl will serve authentic Chinese street food, including noodle bowls and dumplings. Yummy Bowl is expected to move in sometime during the last week of June.

“Yummy Bowl will bring a whole new group of people, because the trailer has 300–500 followers, most of whom are Asians customers that eat there almost every day.” Osborn said. “In Asian culture, the noodle bowl is considered a staple item that is consumed on daily basis.”

The Chinese owner of Yummy Bowl does not speak English and Osborn was approached by various students for translator jobs. Osborn was surprised to know there are Asian students in 26 West, who never visited the food park even though the apartment building is across the street from Rancho Rio Eatery. Instead, they went to Yummy Bowl’s previous location on 26th Street and Martin Luther King Jr. Boulevard.

Osborn said the diversity of cuisine will also encourage new students to come to the park and try new food.

Stony’s Pizza is the second food truck that will be introduced to Rancho Rio Eatery on July 1. It is traditional pizza that will be sold by the slice. Osborn said Stony’s Pizza will be open late nights on weekends.

Trailers that are open late are an attraction for students, said Alexa Saltzman, an undeclared freshman and a regular customer at the Rancho Rio Eatery.

“A lot of people want these food trucks to be open late nights, especially on Thursdays, Fridays and Saturdays,” Saltzman said. “There’s always a huge demand for late night munchies in this area.”

Osborn said the Rancho Rio Eatery has not decided what the third food truck will be. He said he and his wife, a co-owner, are considering several options in a very selective process. Osborn said they will make up their mind by next month and the new trailer can start business in August, by the time students get back in town.

“The main characteristics we look for is the quality of food, the business plan and personality,” Osborn said. “It is about having a gut feeling as to who is going to make it, how well they will do, how good the food is and how passionate [trailer owners] are about their food and what they do.”

Food trucks have gained popularity in Austin mainly through word of mouth and festivals, including ACL, as well as their increased presence on social media such as Facebook and Twitter.

“Food trucks are such a hot thing now and Austin’s pretty well known for it,” Osborn said.

The Rancho Rio Eatery has 11 different food trucks, all of which have a different selling point. Fat Tony’s, Bender’s and Bowls and Wunder Waffle are the three food trailers leaving.

Rancho Rio Eatery has maintained a diversity of options by being selective in their choices of food trailers, in order to avoid fierce competition between neighboring food trucks that are mere feet away from each other.

“The really nice thing is that there isn’t really a crossover between foods existing or incoming food trucks here so there shouldn’t be direct competition for anybody,” Tim Sorensen, the owner of the Cow Tipping Creamery trailer, said.

According to Sorensen, the introduction of the new food trucks will bring a boost to the park in general. He said the more trucks introduced, the more options customers will have, and the more people will come.

“I am excited,” Sorensen said. “I think it’s going to be great. The more exposure we have to a wider audience, better it is for everybody. I cannot wait ‘til  they get in,”

Sorensen also said food trucks have existing customer bases that will follow them to this park once they establish themselves here. A growth in customer base is likely to benefit the food park as a whole

Osborn said the Rancho Rio Eatery will be hosting events and play music throughout the semester to draw a larger crowd and increase popularity of the place.

“With the football season coming up, Rancho Rio Eatery will be a great place to hang out and bring along parents and families,” Osborn said. “We hope the kids keep coming and that they like the new trailers.”