Real victor in Fisher v. Texas yet to be determined 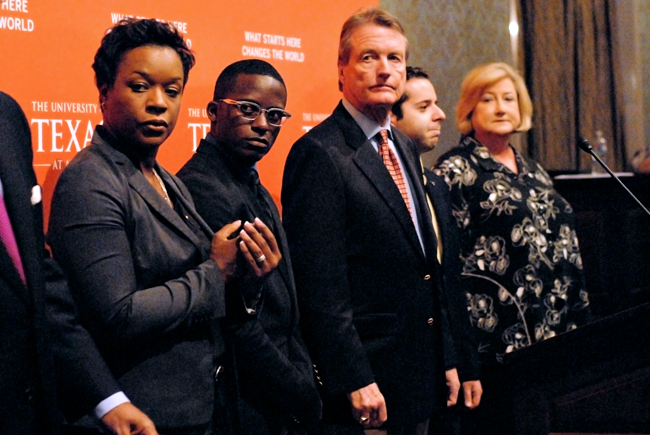 On June 24, the Supreme Court voted 7-1 to kick back to the Fifth Circuit Court of Appeals the case of Fisher v. Texas, which pitted Abigail Fisher, a white woman who was denied admission to UT-Austin, against the University.

The decision of the Supreme Court came as a surprise to the many who had been expecting a broad ruling on the constitutionality of affirmative action. Instead, the justices’ decision kicked up a cloud of uncertainty, and the immediate impact of the ruling on affirmative action was so vague that both Abigail Fisher and UT-Austin President William Powers Jr. declared victory on national television.

The University certainly has reason to be happy with the ruling, in that the Supreme Court didn’t dismantle UT’s existing admissions criteria. But the court also suggested that the Fifth Circuit had failed to hold UT-Austin’s admissions policy to the standard of “strict scrutiny” required for admissions processes that take into account an applicant’s race, meaning that UT-Austin’s holistic admissions policy will once again be considered in the lower court, and that this time the judges must go over the University’s policies with a finer-toothed comb.

Strict scrutiny, as laid out in relation to affirmative action programs in Regents of the University of California v. Bakke, requires universities that consider race in admissions to prove that doing so achieves a “compelling interest,” such as the benefits of exposure to new ideas that come from having a diverse student body. Moreover, a university must be able to prove that the measures it uses to achieve this “compelling interest” are “narrowly tailored” to its purpose.

In 1996, the Fifth Circuit Court of Appeals dealt a blow to the racial diversity of UT-Austin when it ruled in Hopwood v. Texas that the law school’s use of race in admissions decisions was unconstitutional. The  Hopwood decision led to the removal of race as a consideration in admissions decisions in the state. After Hopwood, minority enrollment at UT dropped, causing the Texas Legislature to put in place the Top 10 Percent Plan in 1997, which increased minority enrollment at the University without explicitly considering race.

Hopwood, however, was reversed by the Supreme Court in the decision of Grutter v. Bollinger, which deferred to universities on decisions about using race in admissions. But last week’s majority opinion, written by Justice Anthony Kennedy, made it clear that deference has its limits. The ruling stated that the Fifth Circuit Court had given too much deference to the University when that court declared it was ill-equipped to “second-guess the merits” of UT’s race-conscious admissions policies. In other words, the Supreme Court declared that the lower court had been too hasty in declaring that UT-Austin’s admissions policy was necessary and fair.

Justice Kennedy didn’t stop at the issue of deference, however. In addition, he pointed out that one of the linchpins in the Bakke schema was that policies like UT’s could not be used if  “a nonracial approach … could promote the substantial interest about as well and at tolerable administrative expense.” Many have suggested that consideration of a student’s socioeconomic level in admissions policies might be as beneficial to the diversity of the student body as considerations of racial and ethnic backgrounds.

But in 2003, six years after the Legislature passed the Top 10 Percent Plan, UT conducted a study in which minority students reported feelings of isolation and a majority of students agreed that there was a lack of diversity on campus.

That same study also found a shocking lack of black and Hispanic students in classes with five to 24 students: Ninety percent of those classes had one or zero black students, while 43 percent had one or zero Hispanic students. These numbers were used to justify the re-instatement of a racially based admissions policy after Grutter was decided. Although the percentages of minorities in entering classes increased slightly after the law’s implementation, these statistics, in our view, provide suitable justification for UT’s continued use of race as one of many factors in the admissions process.

It has been less than 50 years since the Civil Rights Act of 1964 became law.  According to the Texas Politics project in 2007, 24.8 percent of Texas Hispanics and 23.8 percent of Texas African-Americans live in poverty, compared to just 8.4 percent of whites in Texas.

In sending Fisher back to the lower court, the justices have put at risk affirmative action policies across the nation.

We agree with Justice Ruth Bader Ginsburg, the lone dissenter in the case, who said, “Only an ostrich could regard the supposedly neutral alternatives as race-unconscious… As Justice Souter observed, the vaunted alternatives suffer from ‘the disadvantage of deliberate obfuscation.’” And as we all know, the only way for an ostrich — or the Fifth Circuit — to see the light is to pull its head out of the sand.