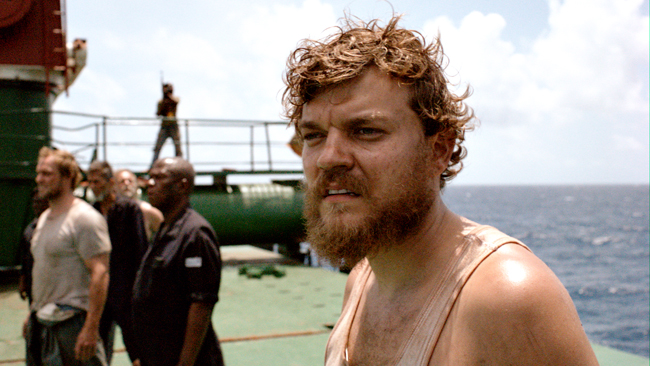 Pilou Asbæk is Mikkel Hartmann in "A Hijacking."

Lots of films are enhanced and emotionally boosted by a musical score, but few have the ability to do the same using silence. “A Hijacking,” the impressive second feature from Danish director Tobias Lindholm, is commendable for the grace it brings to quiet moments, either to build tension or to let a devastating line of dialogue sink in.

The film portrays the hijacking of a Danish cargo ship by Somali pirates, and Lindholm tells his story with remarkable focus, following Mikkel (Pilou Asbæk), the ship’s chef, and Peter (Søren Malling), the CEO who bullheadedly takes charge of negotiations with the pirates. As the hostage situation drags on, month after month, with living conditions on the ship constantly worsening and Peter bogged down in a psychological chess match with Omar (Abdihakin Asgar), the pirates’ negotiator, both lead characters find themselves deteriorating.

Told in a different way, “A Hijacking” could easily play out as a big-budget action film or a gut-punch of a drama, but Lindholm’s approach trades the histrionics for an efficient, understated aesthetic. The film unfolds at a deft, precise pace, smart levels barbs of corporate satire with brevity and nuance and intentionally shies away from big moments, even keeping the titular invasion off-screen. However, its unconventional dramatic choices are balanced out by its versatile, intuitive camerawork by Magnus Nordenhof Jønck, brutally unsentimental editing from Adam Nielsen and the way “A Hijacking” is infused with a relentless mounting intensity that informs every scene.

As Mikkel quietly implodes on the ship and Peter struggles to close a deal with Omar, “A Hijacking” occasionally drags, but the low-key, natural performances from everyone involved give the proceedings the immediacy necessary to keep the audience invested. Asbæk, in particular, excels at showing what a physically and emotionally punishing experience his character is going through, and by the time the film ends, Mikkel has undergone a genuinely disturbing transformation at Asbæk and Lindholm’s hands.

“A Hijacking's” unwavering focus is undeniably effective, but given the skill of everyone in the cast, the film underserves its supporting actors to its own detriment. With a bit more time dedicated to exploring the other characters on the ship, who are mostly just a little more than interactive set dressing, “A Hijacking” could have been more compelling and, in its final moments, more dramatically satisfying.

“A Hijacking” is a proudly stoic, restrained film all the way through, and even its vaguely tragic ending is very low-energy, reveling in the stricken silence of its hollow victories. The film’s unshakable focus makes for a gripping but minimalist story of corporate inefficiency and masculine collapse, and proudly establishes Lindholm as a noteworthy, talented voice in Danish cinema.