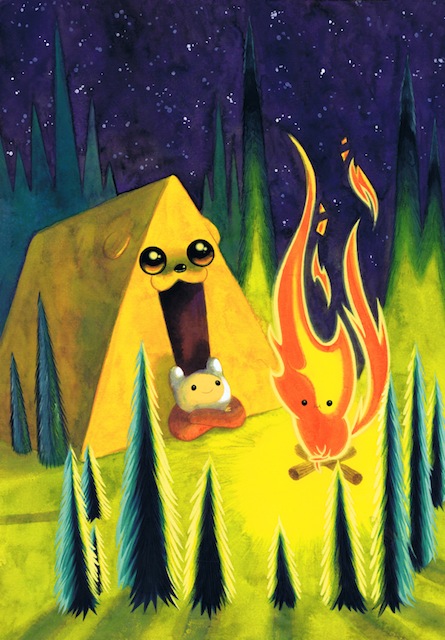 "Jake Is A Tent" by artist Tiny Kitten Teeth and other "Adventure Time"-themed art is on display at Mondo Gallery.

An adventurous boy and his anthropomorphic, magical dog and a cartoon bird and raccoon employed as groundskeepers ­­— probably the last thing you would expect as the subject matter for an art gallery.

Mondo Gallery, located on Guadalupe and 41st streets, is currently displaying artwork based on the cartoons “Adventure Time” and “Regular Show.” The exhibit runs through July 20. This is the 11th gallery show that Mondo has put on since opening the doors to its gallery back in March 2012 during South By Southwest.

“We have kind of became a fun place to hit when in Austin,” said Justin Ishmael, founder and creative director at Mondo. “Gallery shows are normally busy for us with fans camping out overnight in some cases to be the first ones to get in.”

“Adventure Time” and “Regular Show” are animated television series on Cartoon Network. “Adventure Time” follows a boy, Jake, and his magical dog, Finn, and “Regular Show” is about a raccoon named Rigby and his friend Mordecai, a Blue Jay, who are employed as groundskeepers at a park. While the shows are aimed toward children, they have developed a cult following amongst young adults.

The current gallery show is a collaboration with Cartoon Network, who provided giveaways and helped with promotion. Cartoon Network signed off and approved every image that is now a part of the gallery.

“The cool thing is they are actually very lenient with our creative vision,” said Mo Shafeek, general manager of the Mondo Gallery. “[They] have allowed our artists a ton of artistic license, while still being hands on and making sure we don't go out of bounds.”

According to Shafeek, the “Adventure Time” and “Regular Show” gallery showing is one of the most popular that the company has put on.

"There’s definitely a big difference between families coming in and our typical fans who seek us out exclusively because of the collectable nature of our prints," Shafeek said.

In order to curate artwork for the gallery, Mondo contacts different artists whom they have worked with in the past to see if they have any interest in becoming involved. The artwork submitted is then looked over.

“We send out an [all points bulletin] months in advance,” Shafeek said. “We review [the artwork] and then decide what best fits the gallery.”
According to Ishmael, the curration process can take more than half a year.

“Depending on the show, an exhibit could take up to 6-8 months to get ready,” Ishmael said. “It all just depends on the subject matter and artists involved.”
The current gallery show features artwork from 34 artists across the nation, including Matt Taylor and Philip Tseng. Many of the artists Mondo works with also produce prints with limited edition sizes, which all sell out within minutes and are able to be picked up at the gallery. Ishmael hopes to expand said gallery in the future.

This article has been updated and edited for accuracy.