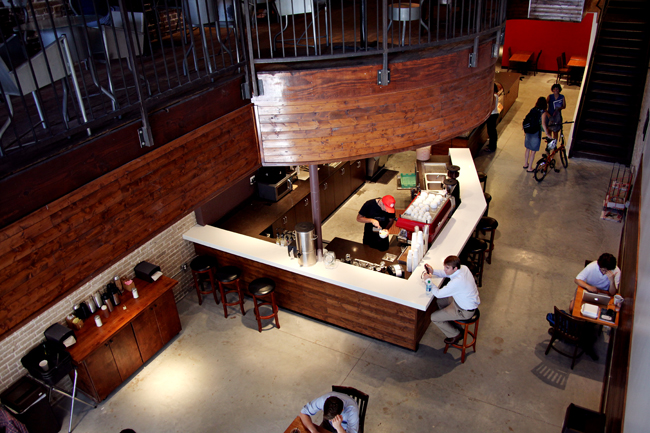 The inside of the reopened Caffe Medici on Guadalupe Street.

After several delays, Caffe Medici’s Guadalupe location reopened on June 24 after a renovation intended to make the coffee shop more spacious and efficient.

The coffee shop orignially closed to fix the sinking floor. However, the owners decided to take the opportunity to remodel the entire shop. Caffe Medici closed in early on March and was scheduled to reopen in the first half of May, but several delays in construction and city inspections set the date back over a month.

Caffe Medici is a locally-owned coffee house with three locaions, all of them in Austin. The Guadalupe location sits across from campus on the Drag, making it a hotspot for students and universty faculty.

“If we could have expedited it, we would have loved to do it as fast as possible,” said Thomas King, general manager of Medici’s Guadalupe location. “But in the end, doing it right so we don’t have to do it again later was more important to us.”

Beyond new floors, Caffé Medici also sports completely new decorations, a new lighting system, a new air conditioner and new equipment for the staff. The kitchen, which was only used to make sandwiches, was removed to make room for more seating, and sandwiches from an outside provider are now being sold.

For the duration of remodeling, employees of Caffe Medici’s Guadalupe were moved to the other two Medici locations. However, regular customers had a more difficult time adjusting to the extended closure.

“I was trolling around to find a decent-enough coffee shop, and most of the time I wasn’t successful” Medici regular Bojan Dragicevic said. “With the proximity to campus and Guadalupe, it was hard to find anything close to Medici.”