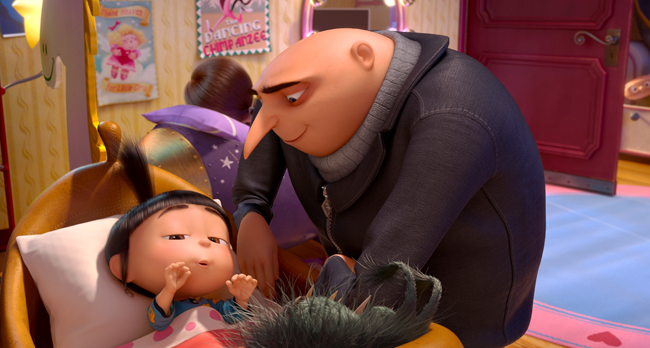 Characters Agnes, voiced by Elsie Fisher, and Gru, voiced by Steve Carell star in "Despicable Me 2." In the sequel, Gru is recruited by the Anti-Villain League to help get rid of a new super villain.

The first “Despicable Me” flick was a pleasant enough diversion, but the only thing that necessitated a sequel was the towering box office gross. “Despicable Me 2” is more of the same — a silly, entertaining bit of cotton candy whose predictable plot is salvaged by Steve Carell’s manic, memorable voice acting and a surprisingly adept sense of humor.

Picking up where “Despicable Me” left off, the sequel finds the formerly villainous Gru (Carell) happily being a single father to Agnes (Elsie Fisher), Margo (Miranda Cosgrove) and Edith (Dana Gaier). However, an upcoming Mothers’ Day pageant drives home how much the girls could use a woman in their lives, a situation which happily coincides with the arrival of Lucy (Kristen Wiig), an agent for the Anti-Villain League, who recruits Gru to help save the world.

The film’s first goal is to make its audience laugh, and it certainly succeeds there. While the first “Despicable Me” leaned a bit too heavily on the trio of young girls for its jokes (and heart), the sequel gives everyone a chance to shine. Carell gives a strong, heartfelt vocal performance, and plays wonderfully off the always-hilarious Wiig. Gru’s endless supply of minions is another reliable source of comedy, fully embodying the film’s adolescent sense of humor with their nonsensical way of speaking and constant titters and giggles.

Although the film never fails to elicit chuckles, is that enough? “Despicable Me 2” is predictable to a fault, coloring firmly inside the lines of what you’d expect from this sort of film, and it doesn’t even try to surprise the audience. The film is structured as something of a mystery, with Gru trying to track down a supervillain, but the film only bothers to pay attention to one suspect, making it pretty clear how things will unfold. Slightly more troubling is the slightly casual racism with which the film approaches its villain, who is little more than a stereotype in a funny mask.

“Despicable Me 2” is, just like the first, a flighty and fun trifle that more or less dissipates the minute the credits roll. The film’s saving grace is its strong comedic backbone, and it’s a smart move to give Gru’s minions their own film, a spinoff that’s teased in the closing credits. While the cast is game and very funny, and “Despicable Me 2” is never boring, it’s also never particularly engaging, content to let its plot play out with little creativity or surprise.