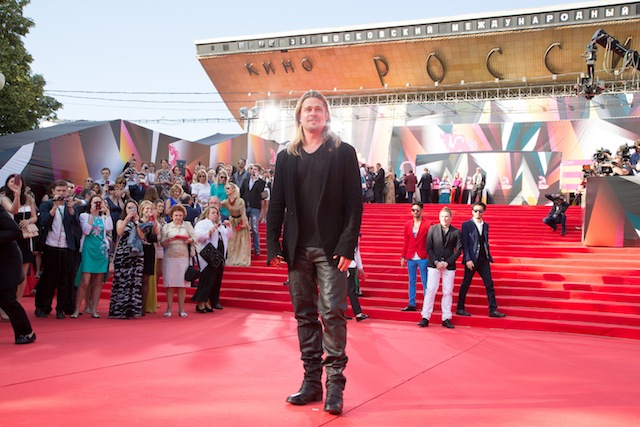 Kanye West walks on stage during a sold-out benefit concert at Madison Square Garden for victims of Hurricane Sandy — not wearing a suit or any typical runaway attire that we all know he can afford. No, he is wearing a leather shirt matched with skintight leather pants.

One of these two articles of clothing has taken off, even being seen on street-wear nuts in New York City. Leather skirts were cool for about a month, with A$AP Rocky and Kid Cudi following West’s lead, but it looks like those skinny leather pants are here to stay for a while.

Leather pants aren’t just a thing for rockers in the ‘80s and motorcycle gang members. During the NBA All-Star Weekend Dwyane Wade and Lebron James both wore matching leather pants on the floor — which also proves it’s not something exclusively for the hip-hop game. Brad Pitt even busted out a pair of the glorious leather pants for a “World War Z” premiere in Moscow.

OK, let’s look at this trend for a second. Leather pants first and foremost are very hot, temperature-wise. Now this might be great for someone on the East Coast, but here in Austin it’s just a bit silly. There are alternatives for the same look, such as waxed denim, which gives the same look as leather pants without the sweat. Also, unless you’re riding a motorcycle, you’re going to bring a lot of attention to yourself, so the look is not for the shy or reserved.

Still, that is precisely the reason why the look is so popular on the red carpet. It is almost impossible for any celebrity to wear leather pants without at least a brief article written about it in paparazzi magazines. This can be good (Scott Disick has been compared to Kanye in terms of style when he’s wearing leather pants) or bad (just think about Rick Ross in huge red leather pants for a second).

The biggest winner of trend is French luxury clothing boutique Givenchy. Although they do not make every single pair of skinny leather pants, they are the go-to brand of some of these stars. There are plenty of hip-hop lines about Givenchy, which started right around the leather pants revival. Does this mean that Givenchy could become the new Gucci as the bravado brand of choice for rappers? A keyword search for “Givenchy” on RapGenius.com gives 92 songs as a result. Givenchy has their leather pants (and probably Kanye) to thank for.