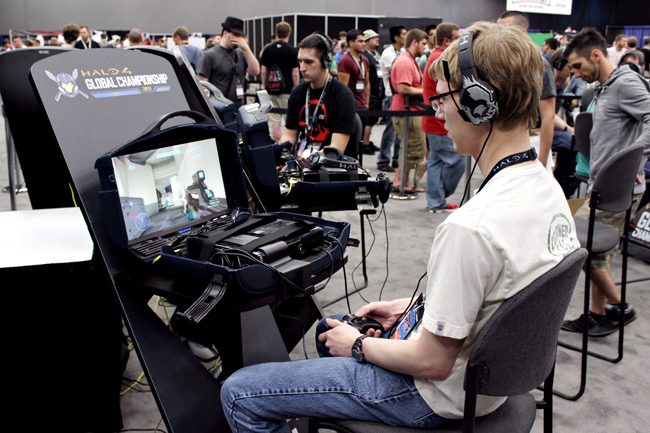 A contender in the "Halo 4" Global Championship competes in a qualifying round at Rooster Teeth Expo.

A horde of nearly 300 people running across a convention floor, nearly knocking others down in the pursuit of an autograph from Jen Taylor, the voice of Cortana from the “Halo” series, was a cinematic sight and just one highlight of RTX this weekend.

Rooster Teeth, which is celebrating its 10th anniversary, hosted Rooster Teeth Expo, or RTX, which included informational panels, celebrity appearances, indie game demos and costumed fans. RTX took place at the Austin Convention Center on July 5-7. This is the third iteration of the convention, with its first year having been a “small” gathering of 500 people at a field in Austin.

Gus Sorola, director of RTX and voice actor for the “Red vs. Blue” series, has seen unprecedented attendance growth at
the convention.

“When we were done last year, we hoped — people thought I was crazy — but I hoped to double the size of the convention, and we successfully did it,” Sorola said. “We are officially twice the size of last year and there have been relatively
few hitches.”

One major presence at the convention was 343 Industries, or 343i, an offshoot of Microsoft Studios and the developer of “Halo 4.” 343i used the convention as a kickoff for the “Halo 4 Global Championship,” which will take place over the next two months and will award the winner with a prize
of $200,000.

“The big goal there was to create a skill-based tournament that is super accessible to all players with numerous ways to qualify,” said Andy “Bravo” Dudynsky, a member of 343i’s Matchmaking Systems team. “It’s been really exciting checking out the action. You can navigate throughout the booth and watch everyone play and stand beside the players.”

343i also used the panel to unveil the newest downloadable content pack for “Halo 4,” entitled the “Champions Bundle.” The pack will include a remake of the fan-favorite map “The Pit” from “Halo 3,” as well as three new sets of armor and seven new stances for a Spartan character.

“We’re fairly happy with the way that ‘Halo 4’ is right now, and we’ll continue to maintain with gentle touches, sort of sustaining that game,” said Frank O’Connor, director of the Halo franchise. “[Our multiple teams have] helped us to do what the right thing for the game is, which is to sustain it and its community.”

“Red vs. Blue,” which many would say is the seminal “machinima,” or video game-based narrative series, is the product that put Rooster Teeth on the map. The cast and production crew for the series premiered the newest episode in front of an audience of fans. The 10-minute clip, which involved characters Caboose and Church and an explosive obstacle course, was met with an uproar of applause.