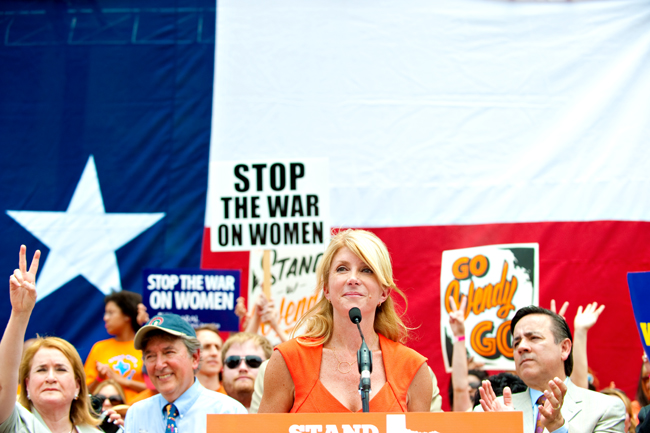 Senator Wendy Davis pauses during her speech to supporters of Texas womens' rights, who gathered at the capitol Monday morning as a reaction to the second special session.

Over the past few weeks, much ink has been spilled on the rising star of state Sen. Wendy Davis, whose 10-hour filibuster of the previous special session’s abortion bill, Senate Bill 5, delayed a vote until just after the midnight deadline.

On social media and in the papers, Davis has been heralded as the Texas Democratic Party’s newest superstar, as well as its best shot at regaining the governor’s office next year.

However, the exalted status the Fort Worth Democrat has achieved in some circles is out of proportion to the weight of her actions in the filibuster and the current political calculus in Texas.

To be sure, Davis’ filibuster has laid out a bright future for her in Texas politics. Standing up against a bill for close to the equivalent of two workdays requires both determination and strength. That said, the excitement over Davis, which has spawned memes featuring the pink tennis shoes she wore as well as a short animated film recapping the filibuster, just doesn’t compute with last week's show of political grit.

Our leaders ought to win public office after gaining the respect of voters through repeated political achievements, not by dazzling the media at a politically opportune moment. The governorship, especially, is a serious position that requires more experience than Davis presently has.

In their scramble for a viable candidate for governor against the as-yet unknown Republican heavyweight, the Democrats have latched onto the most politically galvanizing Texas Democrat to come along in years. Not since 2003, when Texas House Democrats fled to Ardmore, Okla., to break a quorum on a redistricting bill beneficial to Republicans, has the Texas Democratic Party been the focus of so much attention.

And not since former Gov. Ann Richards has a woman been at the center of it all.

However, it’s not that the Democrats haven’t had any potential candidates until now. To the contrary, Julian Castro, the current mayor of San Antonio who electrified the Democratic voting base with his keynote address at the party’s 2012 national convention, would likely have posted impressive numbers had he thrown his hat in the ring. The real problem, then, is that none have wanted to put themselves forward because of the political calculus against them.

Not a single Democrat has won statewide office since 1994, and according to a survey conducted by the Texas Politics Project in July 2008, 39 percent of Texans identify as conservative, 41 percent as moderate and only 20 percent as liberal.

But with the Democrats riding high on a wave of adrenaline and the next gubernatorial election less than 18 months away, it makes sense that the party should want to start planning for 2014. However, Davis’ chances of election are bleak. According to a survey conducted by Public Policy Polling, a national polling firm, Davis trails Gov. Rick Perry by 14 points (55 to 39) in a hypothetical race. Davis fared better, though still came in second, against Texas Attorney General Greg Abbott (her most likely competitor were she to enter the race), trailing him by eight points (48 to 40).

What do these numbers tell us? The fanfare over Davis is overblown and premature, a reality acknowledged even by Amber Mostyn, a Houston trial lawyer whom the New Republic has identified as Davis’ “most powerful political patron.”

“Don’t get me wrong,” Mostyn said. “I have always wanted Wendy to be my governor, but I don’t want everyone to get carried away with the events of the day without the mathematics having changed.”

In other words: the Democrats have a way to go before they can justify this level of elation.