What’s next for Texas abortion legislation 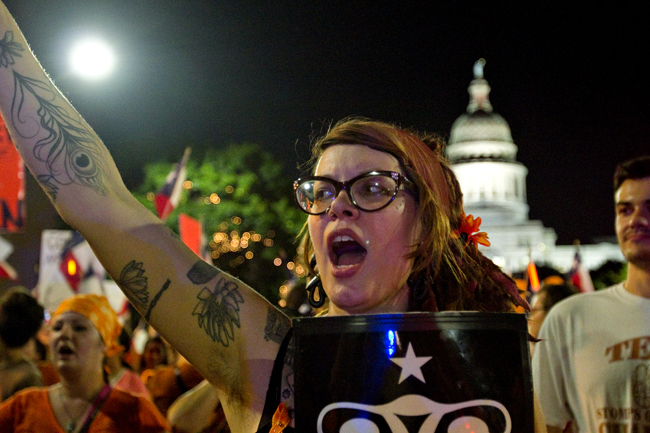 A pro-choice activist marches through downtown Ausitn, Texas on July 12, 2013 with fellow opponents of legislation restricting abortion across the state. The march capped off weeks of opposition to legislation proposed by Republican state legislators, who ultimately succeeded in approving Senate Bill 1 during a second special session.

While Texas Gov. Rick Perry signed abortion legislation into law Thursday morning, the new rules are already anticipated to end up in court before they even go into effect.

The abortion legislation passed following weeks of mass protests and a high-profile filibuster. It allows abortions only in surgical centers, requires doctors who perform them to have admitting privileges at nearby hospitals, dictates when abortion-inducing drugs are taken and bans abortions after 20 weeks unless the woman’s life is in imminent danger. Supporters of the legislation say it makes abortion safer, but opponents of the new rules claim they restrict access to abortions as many clinics will likely close statewide as a result.

UT Law professor John Robertson, who specializes in bioethics, said the abortion providers and clinics will likely bring a lawsuit on behalf of Texas women. Robertson said the 20 week ban in the law conflicts directly with Supreme Court precedent that upholds a woman’s right to a fetal viability abortion until 24 weeks.

Other provision regarding admitting privileges at a local hospital and surgical center requirements for clinics and for doctors to have hospital privileges are likely to be unconstitutional, Robertson said. He said this is because under Planned Parenthood v. Casey, the law cannot create an undue burden on a woman’s right to abortion.

“The law makes it really difficult for abortion clinics to meet the requirements, thus driving them out of business and there is no compelling reason, health wise, to justify that,” Robertson said.

Robertson said the part of the law regarding abortion-inducing drugs can be challenged which requires doctors to be in the room when women take the pills that induce abortions. The state requires compliance with FDA guidelines that apply to manufacturers and sellers of drugs, not doctors. This will make it more difficult and costly to use abortion pills, potentially posing an undue burden under the existing cases.

“Those guidelines are out of date and standard practice in the field is to use lesser dosage of the drug and to have the woman taken a second drug at home,” Robertson said.

Robertson said there’s a good basis for challenging all four provisions of the abortion legislation. The legal process against the law will begin with a petition against the law, followed by an injunction, which is an order from the court against the law going into effect immediately pending the litigation

“However, the law will go into effect until there is an injunction against it,” Robertson said.

Robertson said in court, first a temporary and then preliminary injunction will be issued against the law going into effect. This is likely to be done in federal district court. If an injunction is not granted, Robertson said the case will be appealed to the Fifth Circuit Court of Appeals, a federal appellate court, and after that could go to United States Supreme Court, at that court’s discretion. Robertson said weather or not the Supreme Court takes a case depends on what the Fifth Circuit Court of Appeals and the other circuits decide. He said all of this could take a year or more.

“The battle is moving from the statehouse to the courthouse. And this is a law that is going to do even more to protect life in the state of Texas,” Abbott said to KHOU News in a campaign appearance in Houston.

The Texas Attorney General’s Office said Abbott would not comment on a lawsuit or legal challenge that does not exist yet.

“Attorney General of Texas has a duty to defend state laws enacted by the Texas Legislature,” Abbott’s spokeswomen Lauren Bean said. “The Attorney General’s Office will be prepared to defend the laws in court.”

Rabbi Rick Brody, of Congregation Kol Halev said he is getting involved in the legal process. He said he has received approximately 80 names of clergy who have signed their letter – http://ow.ly/n1eSE – and are still receiving more.

“I have become increasingly appalled at the utter lack of concern for a real focus on pregnancy prevention and general reproductive health from the same officials who are so concerned with restricting abortion,” Brody said. “This disregard for women’s health leaves me feeling that the state government has abandoned one of its primary functions and I am resolved to combat this assault on women’s choices and well-being.”

Brody said they will start gathering the support of religious organizations that are not specific places of worship but represent the pro-choice views of people with faith, such as the National Council of Jewish Women or Catholics for Choice, which will also allow for individual people of faith to add their support.

Brody said their focus will most likely be to ensure that women in remote areas get the care they will need by helping the various reproductive health facilities throughout the state to remain open.

“We hope to gain momentum as a mass movement of religious Texans who care about women’s health, social justice, women’s dignity, and religious freedom.”

Brody said he is certain the abortion law will be challenged in court. He said courts in other states' jurisdictions have struck down each of the items that comprise this law that were part of other states’ laws, so there is precedent to suggest that each of these provisions will be found unconstitutional.