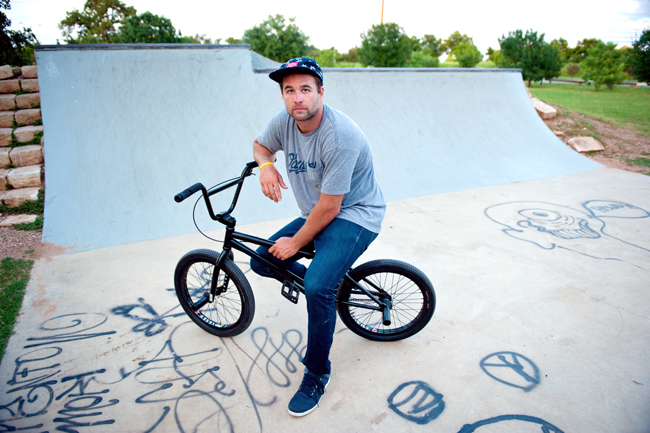 Professional BMX rider Aaron Ross, who lives in Austin, has ridden in nine X Games and was a commentator at the BMX segment of last
summer’s X Games. " />

Professional BMX rider Aaron Ross, who lives in Austin, has ridden in nine X Games and was a commentator at the BMX segment of last
summer’s X Games.

Within the state of Texas, sports are a way of life. Home to two MLB teams, two NFL teams, three NBA teams, NBC’s Friday Night Lights and a mob of frenzied fans, Texas is known for its all-American, traditional sports culture.

“Austin is known as the Live Music Capital of the World,” said local skater Colten Perry, an Austinite who was involved with the committee organizing Austin’s bid for the X Games. “But we could be known for extreme sports as well. I think the X Games are going to bring more of that here.”

Austin was chosen last week by ESPN to host the summer X Games in May 2014. Austin, which is replacing Los Angeles, was one of four finalists. The X Games will take place next month in Los Angeles for the last time.

The city’s new Circuit of the Americas complex in South Austin, which hosts Formula 1, was heavily involved in bringing the X Games to Austin and will host most of the competitions next year.

Aaron Ross, a professional BMX rider who is from Corpus Christi but currently resides in Austin, has ridden in nine different X Games. Despite not participating in recent games, Ross has stayed involved with ESPN and X Games and was the commentator for last summer’s X Games for the BMX portion of the competitions.

“For the last 15 years, Austin has been one of the biggest BMX cities in the world,” Ross said.

Because of its outdoor-friendly residents, Ross said, Austin is the prime spot for the X Games and it made sense for ESPN to choose Austin over other options.

“Austin is such a young city, such an outdoors city, everyone enjoys being outside,” Ross said. “It makes sense. It’s going to open a lot of doors and minds for this sport to what it is and what it can be.”

With the construction of the Circuit of the Americas facilities and the Formula 1 competitions, Ross said Austin is emerging into the motor sports scene.

In addition, Austin is emerging as a landing point for professional athletes in the extreme sports related to the X Games.

“When someone decides to go pro, they move somewhere like Austin because we have tons of filmers, tons of photographers,” Ross said. “We have media here, we have big contests.”

While the announcement of the X Games moving to Austin resulted in a lot of excitement for local BMX fans, business owners might have a different reason to be excited.

Just as any national event would, the X Games is expected to bring millions of dollars to the city’s economy. Austin, already home to events including Austin City Limits, South By Southwest and Formula 1, could profit substantially from tourists visiting Austin for the weekend event in May 2014.

Paul Thornton, Circuit of the Americas director of events and entertainment, said events bring tourists with money to spend to Austin, which will result in more jobs, more infrastructure, better restaurants and shops as well as increases in property values.

Circuit of the Americas and the Austin Chamber of Commerce did not have an estimate for how much money the X Games could bring to Austin’s local economy, but both groups cited that the X Games brought Los Angeles more than $50 million in 2010.

“We expect that or more here because we have more capacity to grow,” Thornton said.

Hardy said the X Games will be valuable to Austin because, similar to Formula 1, it brings international attention to the city.

Tomas Pena performs a trick on his BMX bike at the Austin BMX & Skate Park on Saturday afternoon.

While Austin may reap economic benefits, fans of the X Games and extreme sports athletes may see their pastime enter the spotlight.

Perry, who has been skating for 13 years, emphasized how big the skate community and BMX community are in Austin and how much it would help those people.

“It’s really important to help the skate community thrive and become bigger in the state of Texas,” Perry said.

Perry is also involved in the Texas Skateboarding Club, an organization committed to promoting alternative sports to youth across Texas.

“The skate scene here is so close, everyone knows each other and there are more and more people starting to skate,” Perry said. “It seems like families here in Austin are a little more open-minded.”

The presence of the X Games in Austin will also greatly help local businesses. Shane Riley, store manager at Fast Forward, predicts it will help businesses, including his, get more exposure and be able to help more people, especially beginners, ride.

While local businesses and skaters are looking forward to how much Austin could grow as a result, some have expressed hesitation.

“Some of the native Austinites are not as for it because they don’t want Austin to get bigger,” Perry said. “Most people, however, are so open to things here that I think it will be well-received and be a good opportunity for Austin.”

Circuit of the Americas is currently taking email addresses to notify fans when tickets go on sale for the Austin X Games in May 2014.