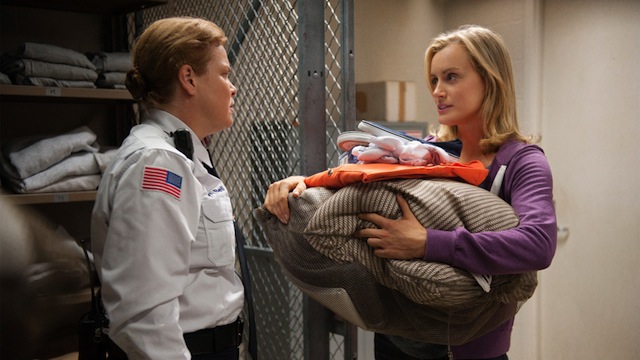 From Jenji Kohan, the creator of the award-winning television series “Weeds,” comes the new Netflix original series “Orange is the New Black.” Were the show a cake, clever crude humor would be the soft cake inside, nude content the frosting and variations of the f-word being thrown around the fondant decor — this delicious cake belongs on your dessert plate.

Piper Chapman (Taylor Schilling) lands in an all-female federal prison for acting as an accomplice in a drug smuggling ring with her former lesbian lover Alex Vause (Laura Prepon) 10 years prior to her incarceration. She leaves her fiance Larry (Jason Biggs), pregnant best friend Polly (Maria Dizzia), and her comfortable, privileged suburban life to serve her 15-month sentence.

Although Piper prepared herself mentally for her arrival to Litchfield Prison, she quickly discovers that prison is tougher than she presumed. The jaded guards could care less about your feelings. Some inmates are scary. There’s fungus in the showers. Several inmates do befriend her, but Piper gets herself in trouble consistently in each episode, beginning with Galina “Red” Reznikov (Kate Mulgrew), an inmate who cooks and runs not only the kitchen, but seemingly a prison caste system. Let it be noted that Litchfield Prison’s inmates run the place: they cook, clean, do laundry, fix repairs, run Bible groups and yoga classes.

At the end of the pilot, Piper comes face to face with the last person she thought she’d run into in prison. Thus begins her journey.

Formerly as Nurse Veronica in the short-lived medical drama “Mercy,” Schilling lands a unique lead role in her second TV series. As Piper Chapman, Schilling is an adorable, innocent-minded woman in the wrong place. She’s got the face and the talent to be Piper “Dandelion” Chapman. She is a joy to watch and viewers will stick by her through her sentence.

Mulgrew rocks an authentic Russian personality as Red. She is one tough cookie who will make you pay and teach you a lesson if you don’t listen to her. Mulgrew gets it right. It’s hard to picture another actress in this role.

Best known for her role as redheaded Donna Pinciotti in “That ‘70s Show,” Prepon dons black hair, thick-rimmed glasses and wits as Alex, former employee of an international drug cartel. Prepon acts well and has great chemistry with Schilling.

Each episode following the pilot follows Piper as she learns the ropes from dealing with each dilemma that arises. Viewers continue to learn more about Piper, her personality and how her past coincides with her present. Additionally, each episode reveals the backstories of Piper’s inmates. They get perspectives from the other inmates and even the guards.

The writers did a wonderful job telling each plot in a cohesive manner for viewers to connect the dots about Piper and her inmates. The show focuses on the women as they form relationships within their community at Litchfield: they may have committed crimes, but they’re living to survive, too.

There is also a small amount of sexual content among the women. Kohan isn’t shy with the camera — she captures everything to make prison authentic.

“Orange is the New Black” has a fabulous cast of diverse people and packs a punch of laughs and cries. This bittersweet show is a cake to keep indulging in. The second season will air next summer. All 13 episodes of season one are available to stream on Netflix.