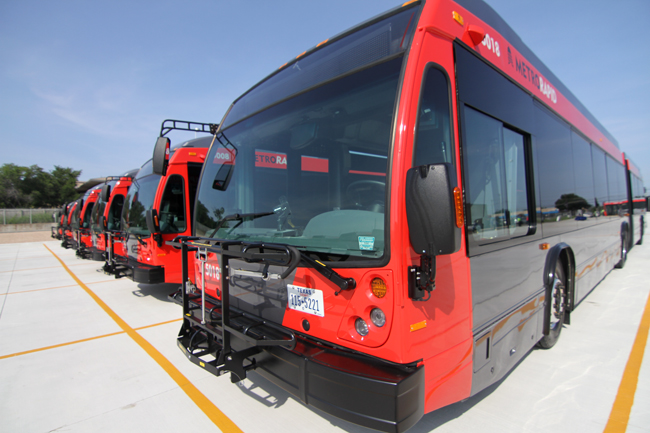 UT students will soon be able to hop onto what some are calling the fastest buses the city has ever seen.

Capital Metro is launching MetroRapid next spring, a $38 million transportation initiative that will offer 40 new buses traveling north and south between 77 new stations. Buses will travel in their priority lanes, which will allow them to bypass heavy traffic and make fewer stops than the average bus.

Two new stations have already been added near the UT campus by Dean Keeton and the West Mall with features such as signal priority, transit priority lanes, limited stops, multiple-door boarding, real-time arrival information and a mobile ticketing app, said Linda Watson, president and CEO of Capital Metro. Watson said MetroRapid is likely to increase ridership and reduce the number of cars on the streets.

“The service will be very competitive with the automobile and the advanced technology will also appeal to the student population at UT,” Watson said.

Officials said Capital Metro will start testing the buses, which will be painted red to represent Capital Metro’s faster service, and training operators in August. Capital Metro received grant money from the Federal Transit Authority and put up the other funds itself, officials said.

Neither of the services’ two routes will offer stations in East Austin or near East Riverside, a major student housing area. One route, 801, will travel along North Lamar Boulevard and South Congress Avenue, while the other, 803, will ride from Burnet Road to South Lamar Boulevard.

Stations were placed in the highest community areas to ensure accessibility to the majority of commuters, Watson said.

Signal priority will also allow buses to “talk” to the traffic lights, enabling them to stay on schedule by altering the duration of the green light. Displays will also be placed at the bus stations giving the exact time of arrival, and commuters will be able to pay for their tickets on a mobile phone app.

“From the housing information we get from the University, we know that the student population is growing at the Triangle and moving up as far as Crestview,” Deeter said. “We are seeing this quarter along the MetroRapid route become a student area.”

Radio-television-film senior Leah Perez, a frequent commuter on Route 20, said her main challenge with current buses is the lack of information on when buses are running late or early.

“The real-time arrival information will be really helpful in terms of scheduling trips,” Perez said.

Since MetroRapid will hit stations every 10 minutes during peak hours and every 12 to 15 minutes at other times, Perez said she thought the new buses would help her with time management.

UT students will be able to use their student IDs for the service, which will have two dedicated lanes running on Guadalupe and Lavaca streets.

“MetroRapid will bring dramatic improvement in terms of how transit operates and the number of people that use it in the future,” Watson said. “We see our future as a high capacity transit service in Central Texas.”