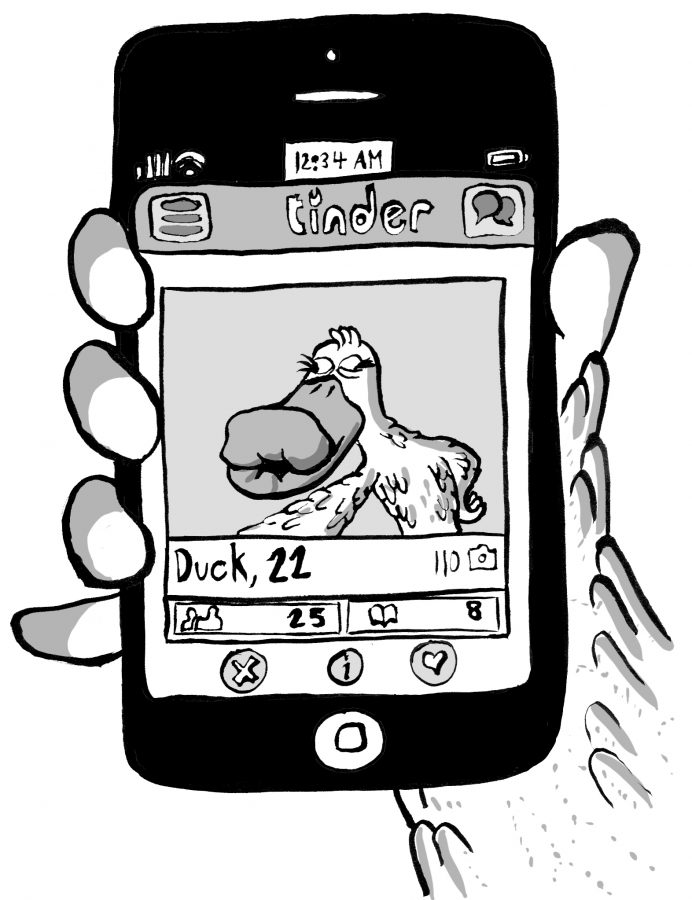 When I open that little orange app, I rarely see faces. Instead, my iPhone is filled with toned stomachs and gray boxes.

I’m talking about Grindr, a social networking app that, like many others, continues to gain popularity among college students.

According to a Grindr representative, the average number of active users in Austin per month exceeds 10,000.

Apps like Grindr and Tinder, a similar “matchmaking” app,  allow users to connect, a term I use loosely, via virtual interface.  Regardless of their actual purpose, one question is inescapable – why do we bond online when we live in such a physically interconnected world?

The core of all these apps is the human need to bond with others. Each has a different method, but the gist is simple – create a profile and start “connecting.” On Grindr, you can choose to disclose certain physical characteristics, and Tinder allows you to select five of your favorite photos for others to see. Chats soon ensue, and hopefully lead to something more.

Jarred Wilson, a recent graduate of the UT School of Information says that when he sends a message on Grindr, “It’s sometimes exhilarating to get that initial response, but it fades quickly.”

This feeling is true for Tinder users as well, and it has the characteristics of another positive emotion — self-affirmation.

Founder and CEO of Grindr Joel Simkhai says, “I wanted a more spontaneous, exciting and instantaneous way to meet guys and to help guys meet one another.” (The Grindr network is aimed at helping men meet other men.)

According to Simkhai, that rush of adrenaline is “what drive[s] the appeal of Grindr.” That exciting feeling is self-affirmation. When a person responds to your message, it is like an approval of your profile, but that’s the most disconcerting fact about these apps.

Social networking apps allow users to create virtual self-representations. Through photos and characteristics that make up profiles on apps like Grindr and Tinder, users are able to hide their flaws and portray themselves in what they consider to be the best possible light.

Weight, height, scars, shyness, personality — they all get modified or suppressed in these apps. The problem is, while this partial identity may gain a user affirmation, it is not affirmation of the self — because the true self is hardly recognizable.

Sure, users can express personality in a chat, but even that dialogue lacks the spontaneity Simkhai intended to promote with his application.

Wilson sees false representation as an issue that extends beyond these apps. “I think that gay men changing how they represent themselves depending on the situation happens in other settings, too,” Wilson says. False representation may be an issue in the physical realm, but it is much easier to accomplish online. Self-affirmation should help eliminate self-consciousness, but when the “self” is denied in a profile, it only serves to strengthen it.

Every day, people criticize the moral quality of apps like Grindr and Tinder. But the problem isn’t that they promote “hook-up” culture. It’s that they disconnect a user — especially young college users, who are still trying to develop their identities — from the true self. My advice? If you use the apps, be yourself — even if it means fewer clicks from potential hook-ups.

Wilson is a Plan II and history major from Canton. Follow Wilson @andrewwilson92.

Editor's Note: An earlier version of this column misspelled the last name of Grindr's founder and CEO. His last name is Simkhai.