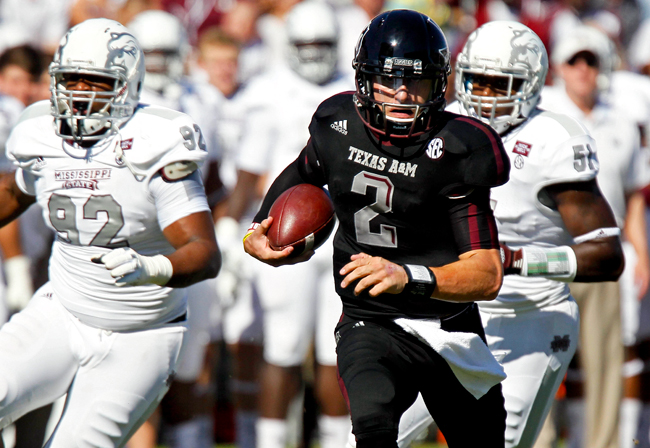 Manziel, possibly reluctantly, returns to College Station after an SEC recordbreaking 2012 campaign in which he became the first freshman to win the Heisman Trophy. Though Manziel showed a lack of maturity this off-season and defenses will be able to better gameplan for him, Manziel could join Archie Griffin as the only twotime Heisman winners ever.

Miller was stellar in his second year for Griffin’s alma mater, throwing for 15 touchdowns and only six interceptions while rushing for 13 more scores. As a result of his impact, Ohio State was the only undefeated team in the FBS at year’s end, and probably would’ve played for a national title if they weren’t ineligible due to NCAA sanctions. Miller is one of the clear favorites to win the Heisman, alongside Manziel.

Clowney enters the season as NFL-ready as any player in recent history. If he plays at a historic level and leads the Gamecocks to the next level of success, he has a legitimate shot to win the Heisman, having finished sixth in voting in 2012. Clowney strikes fear in all he plays against, and thanks to the media buzz from his hit in the 2013 Outback Bowl against Michigan, has become a household name to even casual football viewers.

Bridgewater’s best shot at the Heisman is to continue his play from the Sugar Bowl and he has all the tools do so, as evidenced by his $10 million insurance policy. Louisville’s weak schedule as a member of the hodgepodge American Athletic Conference should boost Bridgewater’s numbers, but will also make a perfect regular season imperative if he is to win the Heisman.

Yeldon is somewhat of a darkhorse pick, but should continue the line of Nick Saban coached running backs who have had stellar seasons as the featured back. As a freshman in 2012 Yeldon rushed for 1,108 yards and 12 touchdowns despite being the backup to Eddie Lacy, the 61 stpick in this year’s NFL Draft. Now Yeldon is expected to more touches, which opens up the possibility of winning the Tide’s second Heisman.