Checking up on Horns in the NFL 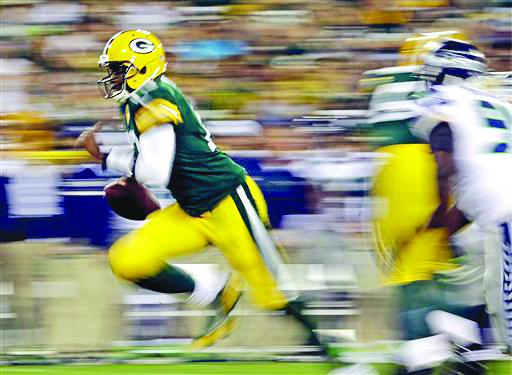 Former Longhorn quarterback Vince Young is now the likely backup quar- terback for the Packers after the team released quarterback Gra- ham Harrell on Friday evening. Young has been out of the NFL since 2011.

After an impressive career in burnt orange, Kenny Vaccaro joined New Orleans in the first of the 2013 NFL Draft — the first time in franchise history the Saints drafted a safety that early. The 15th overall pick will strengthen the Saints’ defensive backfield, which was the second-worst in the league last season. The hard-hitting Vaccaro recorded 92 tackles in his final season at Texas and tallied two interceptions. He’s already created a buzz around the Saints’ organization after starting a few on-field skirmishes, most notably with veteran tight end Jimmy Graham.

Former Olympian and Longhorn Marquise Goodwin established himself as an impact player early on for the Bills this preseason. Goodwin, a third-round pick in 2013, returned a kickoff 107 yards for a touchdown in his first preseason game.

Goodwin will add needed speed and quickness to the Bills’ return game.

The Arizona Cardinals selected Alex Okafor in third round of the 2013 NFL Draft. The defensive lineman set a number of records during his senior season, which included a 4.5 sack effort in the Valero Alamo Bowl. Okafor, who played defensive end at Texas, is listed as an outside linebacker on the Cardinals’ roster. Either way, expect Okafor to find a way to the quarterback.

Young is back in the NFL after sitting out the 2012 season, after the Bills released him at the end of the preseason. The Packers released Graham Harrell on Saturday evening, making it likely that Young will be the backup to Aaron Rodgers to start the season. Although he is firmly entrenched behind Rodgers on the depth chart, Young impressed in his preseason debut, throwing for 41 yards and a touchdown while rushing for 39 yards on three carries in Friday’s 17-10 loss to Seattle.

Orakpo returns to the Redskins’ starting lineup in Week 1 after a torn pectoral muscle forced him out of the final 14 games of 2012. The Redskins hope that Orakpo, who has recorded 29.5 sacks in 49 career games, can return to form as a pass-rusher. If he can, it would be a huge aid to the 30th-ranked pass defense in the NFL. Now in a contract season, the 27-year-old outside linebacker is healthy and primed for a productive year in Washington.

Ross will play a significant role in the Giants secondary, especially after cornerback Jayron Hosley left Saturday’s preseason game with an ankle injury. If Hosley is unable to return for the season opener, Ross could slot as the Giants’ third cornerback behind Prince Amukamara and Corey Webster. In the pass-happy NFC East, look for Ross to see plenty of time in New York’s secondary.