Cockrell in search of alternative funding for new research center 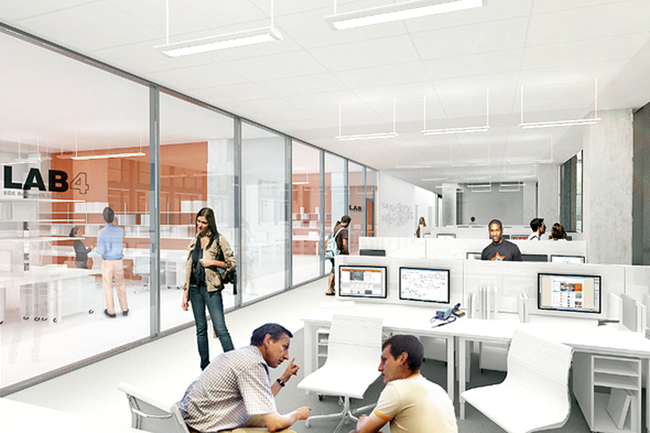 The proposed Engineering Education and Research Center would feature collaborative spaces for students and faculty to work in.

A new engineering building, which would have included new research laboratories, collaboration space and centralized student services, did not receive a tuition revenue bond critical to its construction in the latest legislative session.

The University has been planning for the Engineering Education and Research Center for three years and will continue to do so, new Provost and former engineering Dean Gregory Fenves said in a statement to the Texan. Fenves said the University will be looking for other sources of funding that aren’t verified yet.

In November 2012, State Sen. Judith Zaffirini, D-Laredo, filed the tuition revenue bond bill as the first bill of the 83rd legislative session. Though the bill was passed in the Senate, the House did not create a conference committee. Ultimately, the legislature was short on time while considering the bill because they couldn’t work on it until the appropriations bills passed only a couple of months before the regular session ended.

Zaffirini said that currently, construction costs and interest rates are low because the economy is improving.

“[It would have been] perfect timing to pass because it is such an economic power tool,” Zaffirini said.

The bill did not pass in the regular state legislative session, which ended in turmoil as Republicans and Democrats faced off over several bills involving abortion and transportation. Although the Legislature then held three special sessions, the bond was not on the agendas.

“We could’ve worked out a compromise,” Zaffirini said. “It was doable, but the clock ran out.”

A tuition revenue bond finances construction through the selling of a bond to the University, but the state then reimburses the school.

“We appreciate the support this critical project has received from the UT System Board of Regents and members of the Texas Legislature,” Fenves said in his statement. “We are continuing to work on plans to complete funding for the building.”

Zaffirini said the engineering research center is important to the University because it will enhance learning, teaching and research and help recruit and retain students and faculty.

“This project is vital for the Cockrell School of Engineering to remain top-tier, attract the best students and faculty and help drive the innovation economy in Texas,” Fenves said in his statement.

Zaffirini said she plans to reintroduce the bill at the next session in January 2015.