Adrian Phillips, Longhorns ready to put defensive struggles in the past 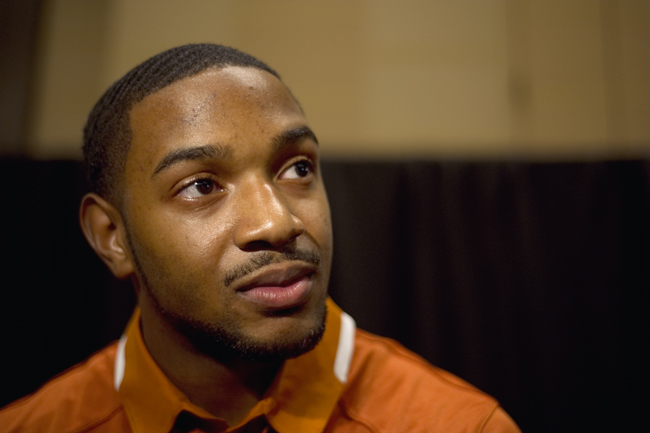 Senior Adrian Phillips will look to get his first BCS bowl game in 2013.

Adrian Phillips came to Texas four years ago with one goal in mind: to win a national championship.

Now the 5-foot-11-inch safety is a member of the only Texas recruiting class in a decade not to have appeared in a BCS game.

“There’s a sense of urgency among this senior class,” defensive coordinator Manny Diaz said. “They were recruited during the 2009 title game period. That was part of their reason for coming here.”

Phillips has matured tremendously since 2010. Phillips did not start a game his freshman season, recording seven tackles mostly in special teams situations. In his sophomore season, he more than quadrupled his tackles while appearing in all 12 games.

Last year, things soured for Phillips and the team as Texas featured the worst defense in the school’s history finishing 74th in the nation in points allowed per game and surrendering 29.2 points per contest. Phillips ended the season third on the team in tackles (72) behind Kenny Vaccaro and Quandre Diggs, but missed a number of prominent, open field tackles and even lost his starting job for a while midway through the season.

“The defense [has] a higher standard,” Phillips said. “When you turn on the tape from last year, you aren’t happy about what you saw. You just really looked at yourself and really made it up in your mind that you don’t want to be that type of player again.”

Now that Vaccaro, the leader in the secondary, is in the NFL, it is Phillips’ responsibility to carry the load as safety next to junior Mykkele Thompson. There is depth behind the pair, but the senior must pave the way.

“The secondary can be really good,” Phillips said. “[Coach] wants us to get back to the level [of] Michael Huff, Mike Griffin, the standard they walked around with. The fact [that] we have the ability to play eight people, it makes the defense that much better.”

Phillips believes the defense is ready to make a statement but acknowledges that there is no room for complacency.

“It’s really week-to-week,” Phillips said. “Say we do well against New Mexico State, we want to raise the bar the next week and the next week. It’s never really a set game that the defense will know we arrived or not.”

Phillips and the defense are eager to see a different color other than burnt orange on the other side of the scrimmage line Saturday.

“There’s new blood on the field,” Phillips said. “You’ve been playing against the same people for three, four months, if you count the spring. Game week is exciting. Everyone has that feeling that we’re about to take off and now it’s time to show the world this Saturday.”