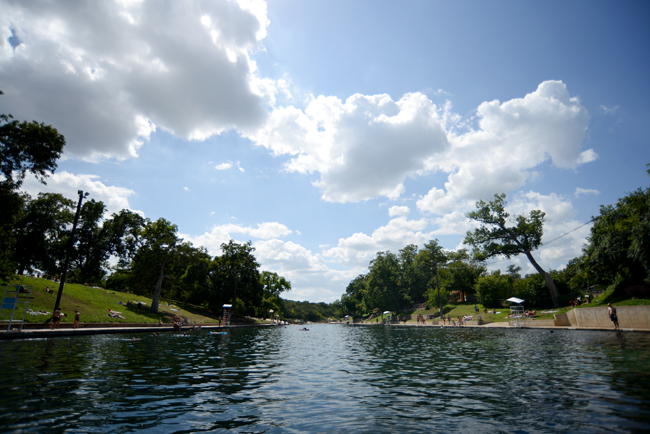 After seven years of planning, the city of Austin will launch its largest renovation of Barton Springs in decades. Barton Springs attracts more than 800,000 visitors every year.

Students returning to Austin will see improvements to the perimeter around Barton Springs Pool, a well-known local landmark, as a result of the multi-million dollar campaign to renovate the area — the first large campaign Barton Springs has launched in several decades.

The grounds improvement project, which is part of a larger Barton Springs improvement plan, will begin in October, although the city of Austin has been planning it since 2006.

Construction projects scheduled for October will include a handicapped-accessible ramp, landscaping to help with tree health, improvements to water quality, paving of the south parking lot and building a metal grid fence to replace the current barbed wire fence.

The three-acre spring, located in Zilker Park, attracts more than 800,000 visitors every year.

“I go to Barton Springs as much as possible — it’s like a staple of Austin in the summertime,” geography sophomore Amy Leung said. “The people-watching there is prime, and there’s a distinct ‘Austin’ vibe to the whole place.”

While working on the plan, the city consulted various Barton Springs interest groups, such as Friends of Barton Springs Pool and Save Our Springs Alliance.

“Barton Springs is very well-loved, and because Austinites have such a close connection with Barton Springs, there will always be varying ideas on improvements,” aquatics division manager Tom Nelson said. “However, the grounds improvement projects went through three years of extensive meetings to develop the plan that has been approved by Council.”

Michael Cannatti, president of Friends of Barton Springs, said important improvements to the north side of the pool grounds include the tree court area and the gate. Cannatti said the city aims to do the grounds improvements in the off-season.

“If you want to walk to the south gate, there’s just kind of a rut that’s been eroded by water for years,” Cannatti said. “It’s actually dangerous to walk if you’re able-bodied, and it’s almost impossible if you’re in a [wheel]chair.”

The handicapped-accessible ramp will run from the south gate to the south deck to provide easier access to the water.

Nelson said the improvement will benefit all visitors by providing them with a safer route.

“It’ll kind of wind back and forth through the woods, and at one point there’ll be a little overlook, so you can stop and take a view from the south side,” Nelson said.

The city is making other safety improvements, including burying the overhead power lines.

“There are a lot of positive changes … generously expanding what is already beloved about the south lawn area,” Cannatti said. “They have expanded the south side with a new fence that’s set back [farther], so now there’s more space for the south lawn experience, and it’ll be taken care of better because of the irrigation.”

At one point, there were proposals for more ornate artwork at the gate, and although Friends of Barton Springs Pool officials said the proposals would improve the pool’s aesthetic experience, many people wanted to keep the pool’s decorations simple, Cannatti said.

The city of Austin has been vigilant in ensuring that the wildlife at Barton Springs remains protected throughout the construction and renovations, Cannatti said. Austin has a federal permit that protects against development at the pool because of endangered species, and the city biologist monitors proposals.