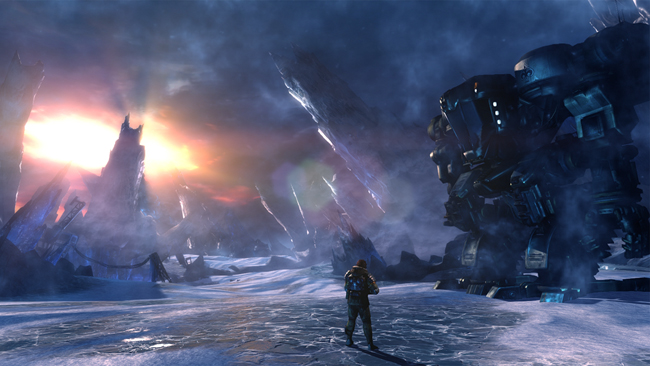 “Lost Planet 3” debuted Tuesday, laying to rest a franchise that dates back to the initial launch of the Xbox 360. Unfortunately for gamers seeking a fresh layer of entertainment value, “Lost Planet 3” continues the stale game-play experience that underlies its predecessors.

Returning to the icy world of E.D.N. III, players will assume the identity of Jim Peyton, a miner who finds himself wedged between the conflicts of human and alien forces. Jim’s “average Joe” appeal may strike gamers as cliche, but his role as the protagonist becomes more profound as the game progresses. In periodic video messages to his wife back on Earth, Jim recounts his harrowing experiences, giving a whole new meaning to long-distance relationships.

This prequel tale makes a respectable attempt to explain the events of the previous two games. Character dialogue is well-acted and many of the plot points are surprisingly well thought out. But the story has its problems. While most of the character interactions are displayed in cut scenes, in-game animations are clunky and distracting. This problem becomes more apparent when using the glitchy shooting mechanics.

The quality of “Lost Planet 3’s” plot is not enough to remedy other crucial pitfalls. Game play has remained much the same, hinging on third-person shooter tactics to reach objectives. Players can now control giant mechanical suits reminiscent of the movie “Pacific Rim,” but fighting large alien monsters becomes a predictable dance of dodging and button mashing.

The game’s artificial intelligence is yet another serious disappointment. Akrid, the alien enemies in the game, are taken down by shooting vulnerable joints and extremities. But with overpowered weaponry and limited difficulty settings, this task is easily accomplished and quickly becomes a monotonous 15-hour exercise. Human enemies are even less entertaining to engage, requiring minimal effort to outmaneuver and kill.

Though it’s advertised as an open-world shooter, “Lost Planet 3” is an empty landscape that lacks sufficient detail to explore. Traveling is cumbersome and there are no tangible rewards for venturing into every corner of the levels. It’s almost as if developers Capcom and Spark Unlimited hit “copy” and “paste” with the level designs.

As far as multiplayer goes, players can kiss cooperative campaign goodbye. Online multiplayer seeks to fill the deficit with limited success. Online players join matches where the objectives are spontaneously generated. A game that begins as capture-the-flag may later evolve into a game of elimination. These dynamic scenarios force teams together toward one goal, making for many adrenaline-fueled situations. But the online longevity of “Lost Planet 3” is questionable. Will the game’s subpar characteristics motivate players to come back in the next couple of months? Probably not.

So what’s the verdict? “Lost Planet 3” brings little to the third-person shooter genre as a whole and little to the Lost Planet series. The new mechanical suits help diversify the combat, but many of the game’s strongest points are outweighed by an unpolished gaming experience that sticks to the beaten path. “Lost Planet 3” will ultimately meet the next generation of gaming consoles as a mediocre relic of a mediocre series.