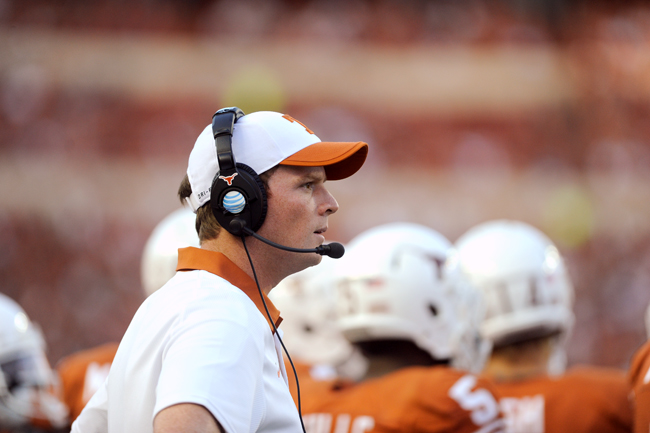 Offensive coordinator Major Applewhite brings a new up-tempo approach to the Longhorns' offense to capitalize on the team's array of athletes.

Instead of the traditional, spread offense, a majority of college football teams are running an up-tempo offense with the purpose of putting more points on the scoreboard. And to the delight of most Longhorn players and fans, Texas is adapting to this new style of play for its 2013 season.

“I’ve been waiting for this offense since I was a freshman,” senior wide receiver Mike Davis said. “My freshman year we kind of had an offense like this, but it wasn’t the same.”

Texas fans had a glimpse of a similar offense when Vince Young led his team to a national championship in 2005. Young ran a spread-option offense, which is slightly up-tempo.

Mack Brown announced that he would run this new attack last spring. Come Saturday, Brown and co-offensive coordinator Major Applewhite will unveil a game plan engineered over the past few months.

“I think the actual playing of the tempo offense is what I want to see, see us manage it,” Brown said. “We’ve done everything that we can do to simulate it in practice. I still think with 101,000 people, players will be anxious. It will be the first time that Darrell Wyatt and Major [Applewhite] have been involved in play selection outside of the bowl game. And I want to see how much we have improved.”

With the new pace, Texas should see around 80 snaps a contest with a range of eight to 20 seconds between plays.

However, many challenges arise when a new offense is introduced. Substitutions, fitness and even practice methods are all concerns for Texas during its inaugural season with the up-tempo pace.

“You just gotta be smart about when you substitute on offense,” said Applewhite. “You can’t break the continuity and flow of what you were doing. It’s not just sub to sub. It’s sub to be smart.”

Additionally, communication must be crisp in all levels of the field. During last week’s scrimmage, Brown prepared the ball boys on the importance of quickness when they work the sideline.

“There are things like your ball boys have to know to get the ball to the official as quickly as possible,” Brown said. “The officials have said that you can go faster if you don’t flip the ball away from us. It’s been really interesting.”

The new offense shouldn’t change much conceptually according to Brown, the key point is to keep the same concepts and tactics but just go faster. And so far, Ash is leading his squad in the right direction.

In last week’s scrimmage, Ash led a 16-play drive that showed how well the offense could work. There’s a bright future for this style of play, which will create more opportunities and points. The coaches know it will be tough for the players physically, but in the end they expect them to revel in it.

“You have to love the fact that you’re tired because you know they are too,” Applewhite said. “This is our opportunity.”