Keys to the Game vs. New Mexico State 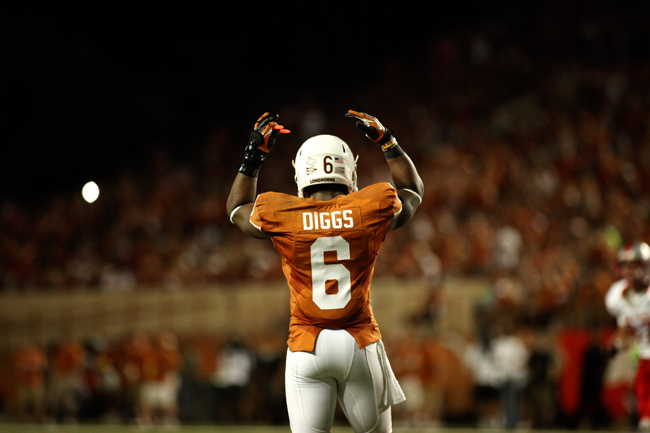 Cornerback Quandre Diggs, along with the rest of the defense, has struggled with giving up big plays this season.

Don’t Play down to the Competition

Perhaps the only way Texas can lose its season opener against New Mexico State is if it plays down to the Aggies’ level. Despite a few slip-ups last season Texas never played down to the competition, finishing 8-2 against unranked opponents and 1-2 against ranked foes. Texas will be energized in its season opener as it looks to build on a 9-4 season that it feels should have been better. New Mexico State has showed problems in all areas of its defense which should play right into the hands of the No. 15 ranked Texas Longhorns. The biggest key in this football game will be for the Longhorns to play their game, whatever that may entail.

A key to any game for the Texas Longhorns should be to establish the running game early and keep pounding away the entire game. The Longhorns finished last season 54th in the nation with 171.5 rushing yards per game and have more quality running backs than the Aggies have quality offensive players. Johnathan Gray, Joe Bergeron and Malcolm Brown all averaged more than seven carries per game for Texas last season, which shows its ability to spread the ball around. The Aggies will never have a chance to get comfortable and adjust to a rushing attack because the Longhorns can slide a different player in on any play. It’s not broke so the Longhorns shouldn’t fix it.

This is the season that David Ash needs to establish himself as the Texas Longhorns’ star quarterback. Ash had an up-and-down season in 2012 but posted solid numbers: 67.3 completion percentage, 2,699 passing yards, 19 touchdown passes and eight interceptions. Ash has struggled in crunch time during some parts of his Texas career but has shown all the qualities of an elite quarterback. The only way to get him to rise to the occasion is to force him to make plays. Whether it’s running more draw plays that force him to pull it back or hand it off in an instant or running more passing plays to make him find his receivers instead of relying on yards from the running backs, the Longhorns need to do it. Ash needs to gain confidence early and know that his success isn’t a fluke. If the ball is put in Ash’s hands to make plays then Texas will see much success in this game and all games moving forward.