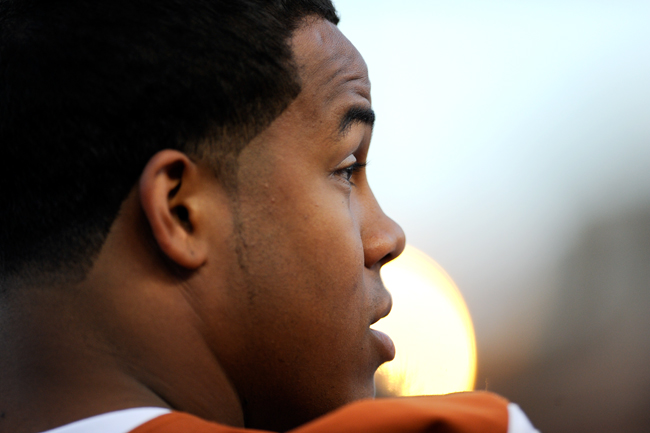 It is no secret the Texas linebacker corps struggled last season.

The position was marred by injuries and inconsistency, and it was largely at fault for a Texas defense that surrendered 29.2 points per game.  The Longhorns believe that those struggles could be behind them, though, and they are optimistic about their stable of linebackers heading in to 2013.

Edmond received the most playing time of the three last season, putting up solid numbers but was inconsitent and a poor tackler at times. He was second on the team with 103 tackles, including four double-digit tackle performances, and recorded a pair of forced fumbles and an interception returned for a touchdown.

Edmond dedicated the offseason to shedding weight in order to increase his quickness and has been impressive in practices thus far. The senior figures to play a big role as the middle linebacker in Texas’ base 4-3 defense, and Longhorns head coach Mack Brown expects Edmond to be much improved over last season.

“Steve started gaining respect in the offseason by losing a lot of weight and he’s had a very good camp,” Brown said. “It will be fun to watch him on Saturday night because I think he’ll be so much better than what people saw last year. They’ll be very surprised and pleased.”

Hicks also returns to the starting lineup after missing all but three games last season with a hip injury suffered in Week 3 against Ole Miss. The redshirt junior made 11 starts the last three seasons and gives Texas another athletic player to line up at weakside linebacker.

Saturday’s matchup against New Mexico State will be Hicks’ first game since being suspended for the 2012 Valero Alamo Bowl. He and quarterback Case McCoy were linked to a sexual assault accusation in which no charges were filed. Hicks was reinstated in January, and Brown says that Hicks has earned back the respect of his teammates after a quiet and productive offseason.

“Jordan had to earn [his teammates’ respect] back and he was able to do that by working every day and keeping his mouth shut and being a really good player,” Brown said. “I don’t think there’s any doubt that [he has] earned that respect back.”

Despite the drama that surrounded him in December, Hicks expects to resume his role as one of the leaders of the Texas defense. As one of the veterans of the linebacker corps, Hicks said it’s not his style to put down teammates after making a mistake, and he envisions himself as a teacher for the younger players to learn from.

“I’m more of a teacher because I lead by the way that I respond,” Hicks said. “I respond better with teaching, just personal one-on one type deal. No humiliation stuff. I like to make sure they know what they did wrong, that’s more my style.”

Sophomore Peter Jinkens rounds out the Longhorns starting unit at linebacker. He played in all 13 games of last season, starting three, and recorded 29 tackles, with three being for a loss.

Jinkens finished last season on a high note, registering 13 tackles, a sack and an interception in his final two games of the season. The sophomore boasts 4.5 40-yard dash speed that should allow him to hang with most running backs, and he enters the season with significant expectations as the Longhorns starter on the strong side.

While much of the offseason focus revolved around the Longhorns’ adjustment to a revamped up-tempo offense, Texas needs superior play from its defense for a realistic shake at the Big 12 title. The first step will be improving at the linebacker position, and the Week 1 starters seem ready for the challenge