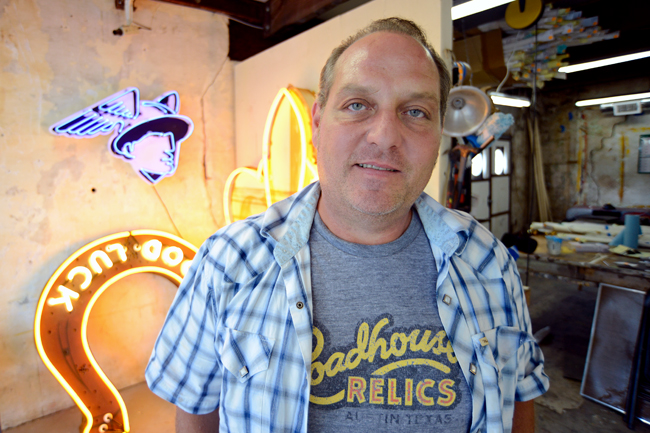 Former welder and hot rod builder Todd Sanders now fabricates vintage neon decor out of his gallery and workshop Austin Relics. True to his style, Sanders shies away from the computer and relies on specialized techniques to create hand-crafted metal and neon art.  " />

Former welder and hot rod builder Todd Sanders now fabricates vintage neon decor out of his gallery and workshop Austin Relics. True to his style, Sanders shies away from the computer and relies on specialized techniques to create hand-crafted metal and neon art.

Countless photos commemorating visits to the capital city feature the words “Greetings From Austin” painted in the background. The mural on the south side of Roadhouse Relics is as iconic as the “Hi, How Are You” frog on the Drag or the “I love you so much,” art scrawled on the side of a South Congress cafe. But at 15 years old, the mural is faded and paint flakes off in large chunks, which is why Todd Sanders, owner of Roadhouse Relics, a neon art gallery, started a fundraising campaign to restore the mural he helped create.

Sanders, a soft-spoken man with a slow Texas drawl and piercing blue eyes, founded Roadhouse Relics in 1997. After moving into the building, local artists Bill Brakhage and Rory Skagen, who lived across the street, came to Sanders with a proposition.

According to Skagen, postcards of old Austin inspired the mural. The artwork came from an original postcard but Brakhage and Skagen made a few changes when creating the mural.

Sanders began fundraising efforts to restore the mural with the Color Squad, a group of artists whose ages range from 14 to 20 years old and who paint murals around Austin. Since Aug. 15, they have raised $8,500 to cover preparation materials, paint and landscaping, though they hope to raise $10,000 total.

When he isn’t busy restoring some of Austin’s iconic street art, Sanders creates original works inside of Roadhouse Relics.

Before learning how to bend neon, Sanders worked as a welder, a hot rod mechanic, an antique picker and a sign painter. He moved to Austin in 1992 to begin an apprenticeship at Ion Art, a custom neon sign and metal fabrication shop.

At first, Sanders did both commercial and fine art neon. But after noticing that many commercial neon pieces were being thrown away after businesses closed, he decided to drop the commercial aspect in 2007 and focus on creating art.

“People thought I was nuts for closing down a profitable part of my business, but it’s not about money; I make enough to survive on,” Sanders said. “It’s about being happy and satisfied, and so I did it, and now it’s more popular than ever.”

Using his creativity and a love for ‘30s and ‘40s neon sign design, Sanders blends vintage and modern influences to make his art. He laughingly calls himself a neon archeologist and seeks out old trade journals to learn tips, tricks and secrets that have long been forgotten. The end result is modern art that remains reverent to the past.

“I’ve seen examples of [neon art], but Todd developed this idea back in the ‘90s when it wasn’t extremely popular and [he] has made it what it is,” Skagen said.

Sanders believes that neon art gives a person more than just an interesting object to look at.

“These are bold and gregarious, and you won’t find anything like them. You might find an antique sign, but if you come here you’ll find something that’s kind of like a tattoo,” Sanders said. “It’s a graphic symbol that is all your own, colorful and one of a kind.”

In the meantime, Sanders and his team of Color Squad artists are working to restore one of Austin’s graphic symbols. Just beyond the sign’s flaking paint, which is expected to be refreshed by October, is the neon-bending man behind the mural, creating original pieces of art inside of Roadhouse Relics.