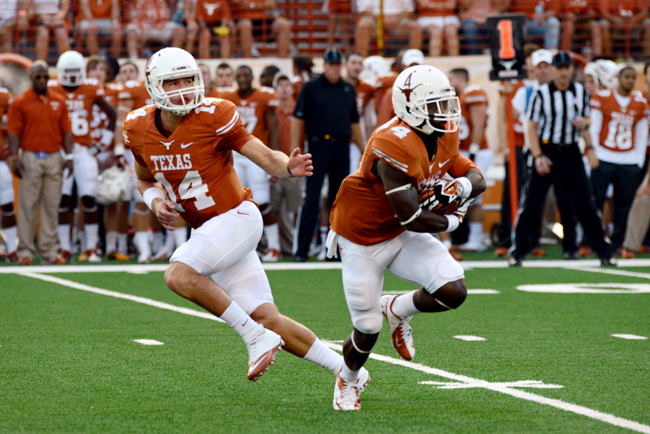 Sophomore running back/ wide receiver Daje Johnson (4) tallied 62 rushing yards and 67 yards through the air while scoring two touchdowns in the Longhorns win over NMSU.

The tension was palpable on a hot, sticky evening at the Darrell K Royal-Texas Memorial Stadium for the Longhorns’ season opener Saturday. With less than three minutes remaining in the second quarter, the much-anticipated new up-tempo Texas offense produced more turnovers than points against New Mexico State’s defense, and the attitude of the fans reflected that. Faces betrayed fear, snarks called for jobs and groans rumbled across the sections.

Then, in a matter of seconds, the offense sparked when David Ash connected with John Harris for a 54-yard touchdown with 1:48 left in the first half. From there, the offense blazed en route to a 56-point outburst and a school-record 715 yards of total offense.

The surge doesn’t guarantee success in the future, but the evidence indicates that the pedal-to-the-metal pace may work. Any time a team breaks a school record it’s a positive sign. The offense did have its hiccups, but by the end of the game it did what it was designed to do: wear down a defense.

“I can definitely tell you the tempo showed up in the third and fourth quarter,” co-offensive coordinator Major Applewhite said. “You ask any tempo team, and that’s what’s going to happen … You can see in the run game, those two-to-three yard gains in the early first half started turning to five, six, seven, eight, 15, 20, 30-yard runs.”

The Longhorns gained 173 yards on the ground alone in the fourth quarter, and the team’s depth showed. Jalen Overstreet, the fourth or fifth running back on Texas’ depth chart, led the team with 92 rushing yards and a pair of touchdowns. By the way, Overstreet was a quarterback this time last year.

Texas’ up-tempo attack worked well after the slow start. Each of the Longhorns’ eight touchdown drives spanned less than five minutes, and six of those were in under two minutes. The offense showed an ability to move quickly and an explosiveness that was lacking last season.

The positives certainly outweigh the negatives offensively, but it’s hard to ignore the slow start. Texas was horrible early on. The offensive line wasn’t getting much of a push, Ash made poor decisions and a trio of turnovers stalled drives.

The result of these miscues: Texas failed to score for 27 minutes against the third-worst scoring defense in the Football Bowl Subdivision last season. If that stretch were to come against a Big 12 opponent, the end result would be different. It’s tough on a defense to see the field so much in such a short time, especially when it doesn’t have a cushion to lean on.

The offense flashed breakout ability, and now it must find the consistency that makes a group go from dangerous to potent.