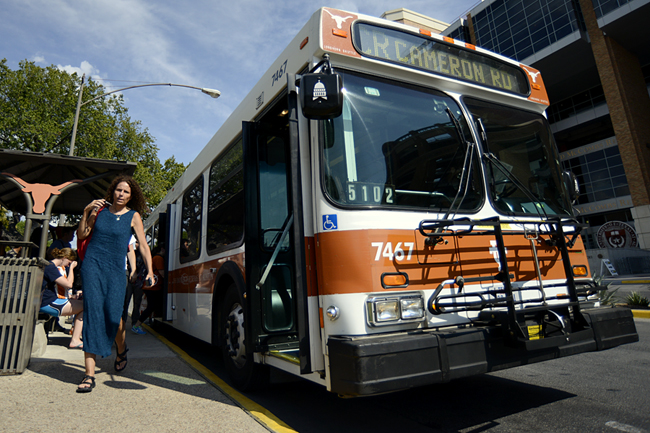 A Capital Metro proposal to eliminate two UT Shuttle routes in 2014 may leave some students stranded and seeking alternate means of transportation to campus.

While a majority of UT students and staff may see only minor changes in their daily commutes, the students who rely on the Cameron Road (CR) and Wickersham Lane (WL) shuttles will have to find another route to campus as early as January 2014, if the proposed changes are approved.

According to Cap Metro staff, the CR and WL shuttles are UT’s lowest-performing routes. Cap Metro is holding public meetings this week on all service changes proposed for spring 2014 before making a presentation to its Board of Directors on Sept. 16.

Roberto Gonzalez, who oversees many of the route changes at Cap Metro, said that service reductions are primarily a resource issue.

Gonzalez said the fixed fund provided by UT for shuttles does not keep pace with increased costs. He said a program of gradual service reductions has been implemented over several years in coordination with the UT Shuttle Bus committee, which is a part of Parking and Transportation Services.

To choose where to reduce service, Cap Metro collects data, including riders per hour and even analyzes student address data to map concentrations of students off-campus.

While Cap Metro staff said that students on the CR and WL shuttle routes would be able to migrate to nearby city bus routes, several students interviewed described safety and convenience as concerns that might make this difficult, and might lead them to seek alternate means of transportation.

According to Cap Metro spokeswoman Melissa Ayala, the best way for students to voice their concerns is for them to attend the public meeting and to take advantage of social media resources such as Facebook and Twitter.

“We are in the public input phase, and we do expect the bulk of the feedback to come through the meetings,” Ayala said. “But if we don’t hear from students, we won’t know what they’re thinking.”

Physics graduate student Brent Covele, who lives on Camino La Costa, called the closure of the CR shuttle “a terrible idea,” and sent an email to friends and residents in his apartment complex encouraging them to comment online on the Cap Metro website.

“If you don’t say anything, then they will cut it, no questions asked,” Covele said.

Other changes that may affect UT shuttle riders include the introduction of a MetroRapid route that would replace the existing 1L and 101 bus routes. The proposed changes, if approved at a Sept. 23 board meeting, would take effect within the first quarter of 2014.

For more information on the public meetings, click here.