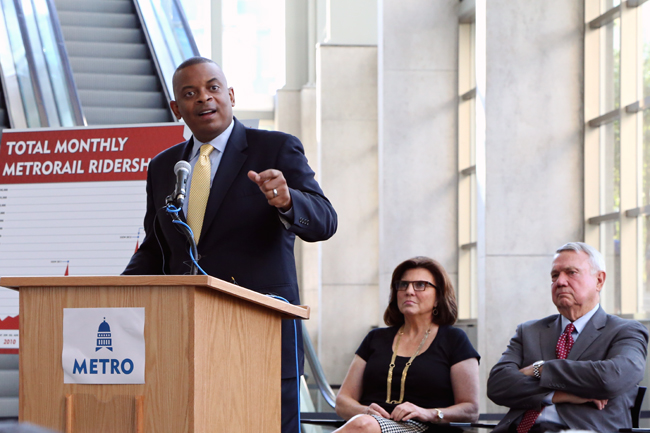 U.S. Secretary of Transporation Anthony Foxx speaks about a federal grant worth $11.3 million to improve transportation in Austin at the Austin Convention Center on Thursday afternoon.

A federal grant worth $11.3 million will revolutionize transportation in Austin and change the way students connect with their campus, the city and the surrounding areas.

The project — announced yesterday — will allow Capital Metro to increase bus and train speeds and frequency while doubling the freight service so fewer freight trucks will be on the streets. It will include a Bus Rapid Transit, projected to begin in 2014. Express Lanes, projected for 2015, will be highway lanes that are free for transit vehicles and tolled for other vehicles.

Another part of the project’s plan is the Urban Rail, a hybrid between a light rail and a streetcar to connect the University to areas like downtown Austin, South Congress and Austin-Bergstrom International Airport. Austin will contribute $15 million to the project, Cap Metro President Linda Watson said.

“These projects truly have the power to transform communities,” U.S. Secretary of Transportation Anthony Foxx said. “No one wants to get used to traffic jams and to long wait times.”

The project will provide faster and broader transportation opportunities for students.

“The alignment is not official yet,” said Dan Dawson, Cap Metro vice president of marketing and communications. “We know that UT is building an engineering school, and there’s the stadium … so we’re going to try to connect those types of large institutions within UT.”

The proposed Regional Rail will connect Austin to surrounding areas, such as Georgetown, San Marcos and San Antonio.

“It’ll give students a great opportunity to be able to just go on a weekend, for example, down there to see a Spurs game or whatever the case may be and not be stuck in four or five hours of traffic,” Dawson said.

Project Connect will turn the Highland Mall and Austin Community College area into a hub with fast connections to UT and other areas of Austin, Dawson said.

Watson said public transit is important when people travel to music festivals and concerts. During March 2013, which was the month of South By Southwest, approximately 95,000 people used the MetroRail, according to Capital Metropolitan Transportation Authority.

147,000 people make a daily commute into Austin, the 12th most congested metropolitan area in the world, which increases the city’s daytime population by 19 percent, according to Cap Metro.

“You don’t have to spend much time in Austin to realize that congestion has the potential to derail our city,” Austin Mayor Lee Leffingwell said.

Project Connect will decrease the amount of time people spend in congested traffic. Between May 2012 and May 2013, each Austin driver spent 41 hours in traffic congestion.

“What people really want is their time back,” Foxx said. “They’re working hard. They’re trying to make it home for dinner [or] make it to a soccer game for their kids. That five or 10 minutes that they save because they [weren’t sitting in traffic], that matters to people right at home.”

The grant is part of the Transportation Investment Generating Economic Recovery grant program which received 585 applications for transportation grants. The Austin project was one of 52 to receive funding.