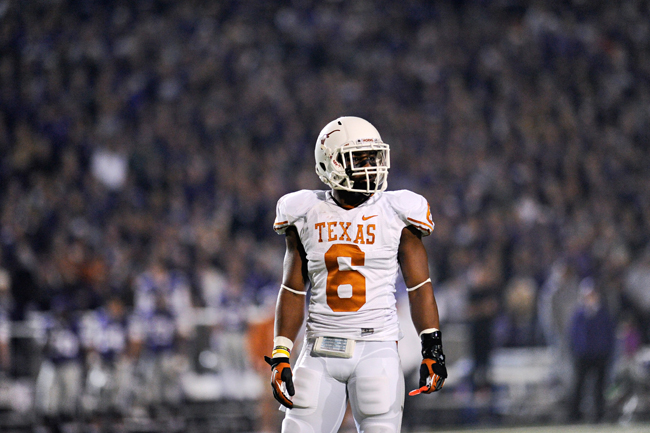 Quandre Diggs paused for a moment after being asked if he was surprised Texas enters Saturday’s road affair against BYU as a seven-point favorite.

“What would I be surprised about?” he finally answered. “My deal is for us to win
every game.”

Diggs has become an anchor of the Texas defense, someone who finds losing unfathomable. He is so supremely confident in his ability that it is hard for him to imagine being the underdog.

The junior defensive back emerged as the Longhorns’ most prominent defensive playmaker over the last two seasons, compiling eight interceptions and 30 passes defended in 26 games. This production, coupled with his physical skill set and his punishing 5-foot-11, 200-pound frame, prompted defensive coordinator Manny Diaz to shift Diggs to nickel back to start the season.

“One of the rules is the more instinctive of a player you are, the closer you want to line that guy up to the football,” Diaz said. “Certainly one thing Quandre has shown over the last two years is he has great instincts for playing
the game.”

Diaz believes Diggs fits naturally at nickel back due to his aptitude for playing in both zone and man coverage. Additionally, the junior boasts the speed to cover receivers in the slot and the physicality to line up in the box and prevent the run.

“[Nickel] plays a lot of different factors in the game,” Diggs said. “You get to blitz, you get to cover and you get to do all different types of stuff and disguises. It puts me closer to the line of scrimmage to go make more plays. That’s something I’m very, very excited about.”

Diggs played well in his debut at nickel back last Saturday, racking up five tackles while breaking up a pass and recovering a fumble against New Mexico State. Senior cornerback Carrington Byndom was impressed by the junior’s performance, saying Diggs possesses the ability to make a major impact in the
Longhorns’ secondary.

“Him playing nickel is allowing him to be around the ball, and that’s something that he is really good at,” Byndom said. “He’s really instinctive and he’s always around the ball, so putting him even closer is helping him out. We’re looking for big things out of him from the nickel spot.”

Diggs follows in the footsteps of a number of high-profile nickel backs to star in the Texas defense, including current NFL safeties Earl Thomas, Aaron Williams and 2013 first-round draft pick Kenny Vaccaro, who led the Longhorns with 107 tackles last season. Diggs realizes that comparisons to Vaccaro are inevitable, but after just one game his focus remains on improving each week and forming his
own identity.

“I can’t compare myself to Kenny, but it was fun [playing nickel] and I can tell you that I enjoyed it,” Diggs said. “I look forward to playing it every week. I’m learning so much more about the game just being there, and I want to just continue to take advantage of the opportunity that coach has given me. I’m very thankful for it.”

The emergence of sophomore cornerback Duke Thomas and junior cornerback Sheroid Evans gives the Longhorns the depth to pencil Diggs into the nickel slot. While the junior still lines up at his traditional cornerback position in Texas’ base defense, Diggs’ teammates expect him to make his biggest contributions jetting around the field as the nickel back.

“He’s a playmaker, and at nickel, you’re there to make plays,” senior safety Adrian Phillips said. “Quandre is just a heck of a player. He has a knack for the ball. With him being at nickel, you don’t have to worry about that position. He’s going to find his way to the ball.”

A big season figures to propel Diggs up the 2014 NFL Draft board, especially due to the small sample of defensive backs capable of excelling in the nickel back slot. Despite this, Diggs’ concerns lie with his opponents each week rather than his prospects as a future NFL draft pick.

“I’m not really worried about draft stock,” Diggs said. “That’s something that’s going to come with [playing]. I just want to continue to go out and play.”

This mindset bodes well for the Longhorns, as every acrobatic interception, athletic pass breakup and jaw-dropping hit supplied by their standout nickel back pushes the Longhorns one step closer to becoming a top-flight defense.