“Riddick” more fun than other installments with help of Vin Diesel 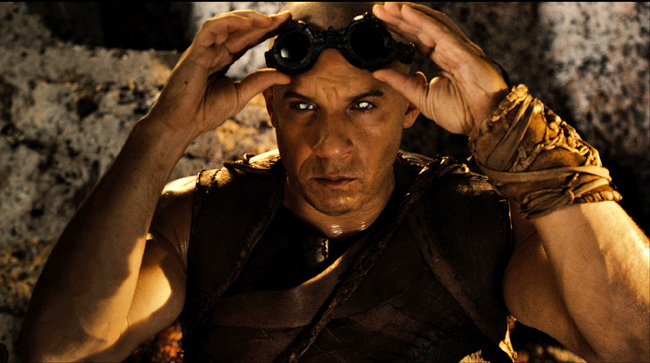 This film image released by Universal Pictures shows Vin Diesel in a scene from "Riddick."

“Riddick” is one of Hollywood’s most unlikely franchises, spawning from the character’s origin in the 2000 movie “Pitch Black,” where Vin Diesel’s notorious murderer emerged as the protagonist simply by virtue of being the last man standing. The 2004 sequel took a shamelessly silly left turn into religious allegory, but “Riddick,” the third film, functions mostly as a stand-alone. The film is a surprisingly entertaining follow-up, equal parts gritty survival thriller and slimy creature feature, though the movie’s best moments come when it forgets it’s part of a franchise and lets Diesel do his thing.

“Riddick” opens with the titular character (Diesel) stranded on an unnamed planet, and as Riddick gets used to his new home, which lacks everything except monsters of all shapes and sizes, he eventually finds a way to signal for help. However, the rescue party is actually two teams of competing mercenaries gunning for Riddick’s head.

Riddick spends most of the film struggling to survive, and Diesel manages to make him a fairly dynamic character without having to shift out of his trademark gravelly gear. It’s a testament to Diesel’s hulking charisma that he manages to inject playful personality into this unlikely sci-fi anti-hero, playing every challenge that’s thrown at Riddick with resigned confidence.

Diesel’s matter-of-fact approach to Riddick helps ground the film’s plentiful supply of ridiculous moments. The desolate planet, on which Riddick finds himself stranded, is full of creatively designed and suitably terrifying monsters eager to devour him, and the no-frills badassery of Diesel’s performance make Riddick’s struggles fascinating.

When “Riddick” switches its focus to the mercenaries that arrive on the planet, it is less successful. The dueling teams of bounty hunters are entertaining, but they’re not interesting or distinct enough for the amount of time “Riddick” spends on them. Jordi Molla and the ferocious Katee Sackhoff are the only ones who seem to be having a good time, and the rest of the cast ranges from stiff to overly dour.

There are a few instances in which “Riddick” makes the clear-cut wrong choice, and the film’s biggest missed opportunity is in the casting of pro wrestler Dave Bautista as one of the mercenaries. Bautista gets a few good lines out, but his character’s final showdown with Riddick is disappointingly brief, and leaves the viewer wondering what the point of putting these two together on screen is if they’re not going to be allowed to wail on each other.

“Riddick” is still the third film of the franchise, and its worst moments are when it’s harkening back to the previous films. The film basically forgets “The Chronicles of Riddick” even happened after the first 15 minutes, but needlessly links one of the bounty hunters (played by Matt Nable) to a character from “Pitch Black.” It’s a needless bit of continuity but clumsy, illogical and a narrative convenience that hurts more than it helps.

By ditching the convoluted mythology and fully embracing Riddick as a brutal but moral protagonist, “Riddick” ends up being a lot more fun than either of its predecessors. Though “Riddick” is more than a bit similar to “Pitch Black,” David Twohy’s stylish direction and Diesel’s infectious glee at donning Riddick’s trademark goggles makes for a bloody, engaging third installment.