With a storied past, Texas hosts top-ranked Penn State 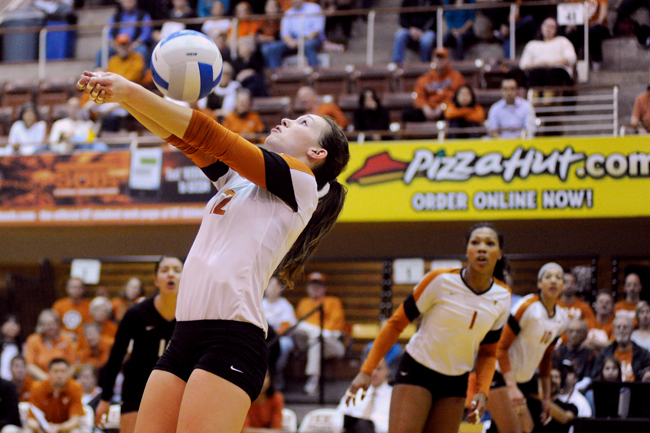 Senior setter Hannah Allison and the Longhorn volleyball team hold a 1-8 record against rival No. 1 Penn State, which will travel to Austin this weekend for the Big Four Volleyball Classic.

This weekend Texas will write another chapter in what is perhaps its most competitive rivalry, but the game won’t be against Oklahoma.

The No. 6 Longhorns (2-1) will host No. 1 Penn State (2-0) as a part of the Nike Volleyball Big Four Classic after taking two of three matches in Hawaii to start their season. Texas holds a 1-8 record against Penn State, including a loss in the 2009 National Championship, where the Longhorns won two sets but fell to a furious Nittany Lions rally. But after the Longhorns won a title of their own last season, the rivalry has reached an even greater magnitude.

“I would say there’s a rivalry, but it’s not really a hated rivalry. It’s more of a respectful rivalry,” head coach Jerritt Elliott said. “When you have programs that respect each other and they know what it’s all about, it’s always kind of a measuring stick for both teams to see how you go about the business.”

The Longhorns faced Penn State last season when the Nittany Lions swept Texas at State College, Pa. Now the rivalry moves to Gregory Gym — Texas is 96-4 since 2007 at home — where the results may be different.

“It’s awesome playing here, especially when Gregory is full, and I just think our crowd really helps us and gives us momentum a lot,” sophomore Amy Neal said. “It’s going to be really competitive as always, but now it’s here so it’ll be a whole different story.”

Texas seems to take strides every season, but Penn State does the same. The team knows the path to the national championship will go through the Nittany Lions.

“Penn State will always be in the mix,” Elliott said. “I think it’s the tradition, when you win that much, it makes the best players want to go there.”

Although Texas lost its No. 1 ranking last weekend, the team showed resiliency and unparalleled talent in all three games. All-American outside hitter Haley Eckerman notched a team-high 28 kills while freshman Pilar Victoria added 25 of her own to lead the Longhorns.

“We didn’t go in expecting to win everything but we learned a lot about our team [in the loss],” Neal said. “We learned we have a lot of improvement to do which is a good thing because we know we can get a lot better.”

While players like Khat Bell and Neal have experienced the Penn State rivalry on numerous occasions, new faces like Victoria are eager to feel the intensity of such a high level of volleyball.

“I’m very excited because this is going to be my first match here in Gregory Gym,” Victoria said. “The game is a lot faster here than at the international level. I’m really excited to play against Penn State, and I’m a little nervous, but that’s normal.”

Penn State holds five national championships in school history, including four straight from 2007-2010. With a win, Texas will make a statement: It’s ready to start a dynasty of its own.

In addition to the game against Penn State, Texas will host another powerhouse, No. 2 Stanford. There is plenty of experience to be gained, and this matchup with the best teams will test the defending champions.

“Obviously we’d like to go in and win these matches and that’s the priority right now, but we’re learning so much about our team,” Elliott said. “That’s the important thing I’m taking away from this, trying to get our team ready for the Big 12 and get back to the Final Four.”