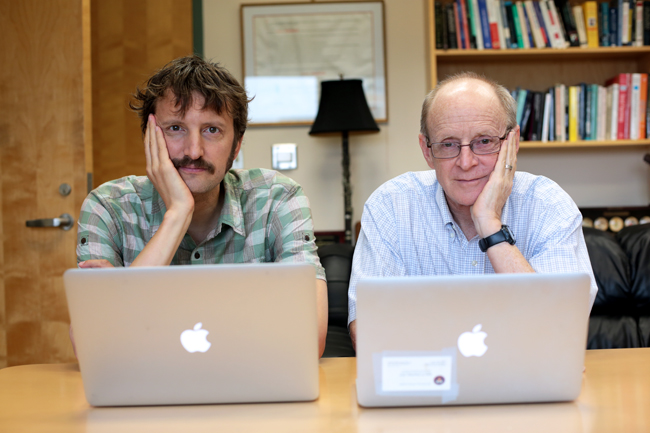 After the first full week of classes, the world’s first synchronous massive online course (SMOC) program still has fewer than 40 non-UT students enrolled in one of its two classes.

Though SMOCs rely on classroom technology integration and are meant for large audiences, they are different than massive open online courses (MOOCs), as SMOCs are live-streamed and involve more individual participation.

The program, launched this semester by the College of Liberal Arts, features an “Introduction to Psychology” course first developed and taught by psychology professors Samuel Gosling and James Pennebaker. The program also features an “American Goverment” class taught by government professors Eric McDaniel and Daron Shaw. While only 30 to 40 non-UT students are signed up for the class, there are more than 800 UT students enrolled.

Each class session is filmed in a studio designed especially for the program in Mezes Hall, and 24 of the 800 UT students are invited to attend each class in person and to participate as an audience.

Gosling and Pennebaker developed the SMOC in which students watch the course live by streaming it on their computers. During class, students are assessed and participate in group discussions through the course website. Pennebaker said he thinks the small turnout this semester is because the University does not know how to properly advertise this class.

The SMOC emerged out of a series of changes Gosling and Pennebaker made to the “Introduction to Psychology” course they have co-taught over the past eight years. Gosling said they use data they collect from each semester to improve their class.

“We didn’t sit down and say, ‘Let’s build a SMOC,’” Gosling said. “Each year, we’re improving things, and this coincided with the emergence of these new technologies that suddenly facilitated being able to do things one couldn’t do before.”

In the spring 2013 semester, Gosling and Pennebaker ran a scaled-down version of the SMOC before the College of Liberal Arts broadened the format for the fall.

The professors said they format the course as a mix between a talk show and an educational program.

“We’ve learned a lot from watching Jon Stewart and these others, because it’s a completely different way of teaching,” Pennebaker said.

The University also launched a massive open online course (MOOC) program with online education provider edX this semester. Unlike SMOCs, MOOCs do not require live participation from students. These classes are being offered to the public for free, but cannot be taken for University credit.

“There are a lot of different experiments underway and innovative approaches that are being explored across the campus,” said Harrison Keller, vice provost of higher education policy and research at UT. “The University is committed to supporting faculty innovation around teaching and learning.”

Although the course shares some similarities with a MOOC, Gosling said the SMOC works differently.

“Although our class looks like a MOOC, it’s only a superficial resemblance to a MOOC,” Gosling said. “The inside of it isn’t a MOOC at all.”

The SMOC allows for more social interaction between students and instructors and also between the students themselves, Pennebaker said.

“The big issue with MOOCs such as Coursera and edX is that they don’t have a really viable business model,” Pennebaker said.

The professors said they would like to see the University continue to expand the teaching format but will remain focused on improving their own course.

“Now that so much is mediated through technology, the distinction between researchers and teachers is breaking down,” Gosling said. “As we teach, we gather data that informs us, [and] we improve our teaching.”