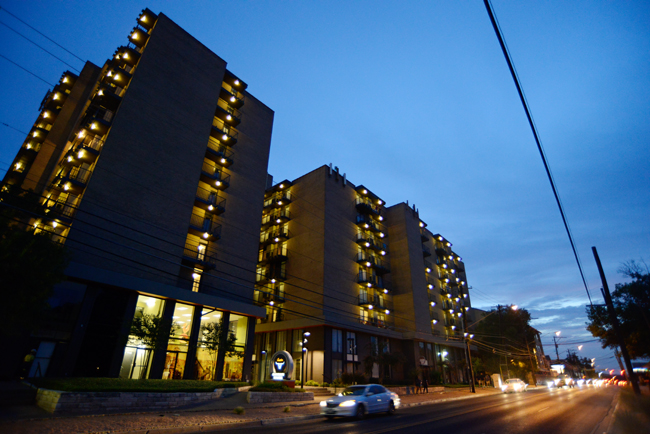 Eduardo Belalcazar, an international relations and global studies junior, is the latest victim to speak out against balloon attacks in West Campus.

On Saturday around midnight, Belalcazar, who is Hispanic, was walking in front the 26 West apartment complex when a liquid-filled balloon was thrown from the building and burst a foot away from his group of friends.

“It didn’t click at first,” Belalcazar said. “I was in shock. There were two guys in front of us who thought the balloon was thrown at them. They started throwing rocks at the balcony in retaliation. That’s when it clicked.”

Belalcazar immediately reported the incident to UTPD and went to the department’s headquarters to deliver a sworn statement. Belalcazar said University police officers collected balloon fragments from the scene.

“Maybe the intent wasn’t inherently racist,” Belalcazar said, noting that he cannot say whether bleach was used in the attack. “But that’s the way these [attacks] are going to be taken.”

Belalcazar added that the group of friends he was walking with that night was comprised of minority students.

“They didn’t want me to call the police,” Belalcazar said. “But if you stay quiet, then things will never change. UTPD told me a lot of these attacks go unreported … You can’t be afraid to speak up.”

Meanwhile, the investigation into the similar assault of government senior Bryan Davis continues. Davis had a balloon thrown at him from the University Towers apartment complex on Aug. 22.

Austin Police Department detective Paul Bigini, who is assigned to Davis’ case, said all evidence taken from the scene was collected by UTPD. UTPD spokeswoman Cindy Posey said the department will pay $500 to have Davis’ clothing and balloon fragments analyzed by a forensics lab. On Friday, Bigini said he had spoken with UTPD throughout the week and that he plans to communicate further with the department when the results of the forensics tests are returned.

“I can’t give UTPD enough credit for their work in this case,” Bigini said.

The Black Student Alliance will be hosting a second rally at 5 p.m. on Tuesday at the West Mall in response to the recent balloon attacks. According to the event’s Facebook page, rally organizers will voice their opposition to “ignorance and racism” on campus.

“I want the people [who] did it to know that I reported them so they know I didn’t take it as a joke,” Belalcazar said. “UTPD told me more balloons had been thrown that night based on all the fragments they collected. I was the first to call in. If someone had reported it before me, we probably wouldn’t have been attacked.”