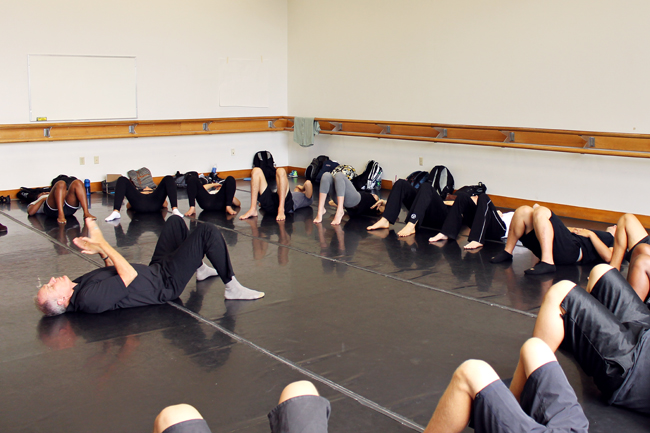 Professor Jim Daniels wraps up his class, Voice and Movement, with a series of meditation exercises at the Winship building Monday afternoon.  " />

Professor Jim Daniels wraps up his class, Voice and Movement, with a series of meditation exercises at the Winship building Monday afternoon.

Twenty top students from across the state have been selected from a pool of about 900 to participate in UT’s new Actor Training Program. This “elite but not elitist” program welcomed its first ever class this fall, freshman Chance Steward said.

“It is the devising work and intensive attention to acting for the camera that makes our acting program so unique,” said Lucien Douglas, associate chair and performance division head of the acting program.

The idea sparked from continuing pressure to keep talented Texas students at UT rather than at prestigious schools such as Julliard.

“There is an oil field of Texas talent in high schools that should be staying in Texas,” Douglas said. “Why should that talent go out of state when we could be giving them anything they can get elsewhere and more?”

The goal of the Actor Training Program is that the vigorous and individualized training offered will expand and enhance the department, allowing it to compete with top theater programs nationwide. Currently students will receive a Bachelor of Arts in theater, but the program is going through the faculty council at present in hopes that it will become a Bachelor of Fine Arts.

“The degree is at present in the BA, but the program is an intensive curriculum of courses in a conservatory styled Actor Training Program,” Douglas said. “That means eight semesters of focused work in sequential courses for which the 20 actors will be together throughout. Pending legislative approval, the curriculum itself will be called a BFA in acting degree.”

Douglas and other department members attended multiple audition festivals in Texas. There, UT staff, along with representatives from other universities across the United States, listened to numerous students audition in the course of a few days.

“When auditioning students, we cannot predict a career,” Douglas said. “But we can look at someone and say, ‘We believe they could compete successfully in the real world.’”

Freshmen in the Actor Training Program, Steward and Christian Henley fit this expectation. Both Henley and Steward said they were excited to be a part of a brand new program where they can set the standards for future students.

“The auditions were like a big cattle call,” Henley said. “You go on stage in front of 50 to 60 schools and do contrasting monologues — a comedic and a dramatic — and you have a minute and 30 seconds, so you have to get it out.”

Lucky for Steward and Henley, UT was one of many schools impressed by their work.

“I was absolutely shocked and honored to be accepted into such a new, small and elite program,” Steward said. “The Actor Training Program stood out because of its world-class professors who actively seek out their students.”

The Actor Training Program prides itself on the sense of community and support within its department.

“Sometimes you get teachers who just teach but don’t really care,” Henley said. “But here the professors, such as Lucien Douglas, truly care about us.”

“Though acting is fun, it’s a lot of hard work,” Steward said. “I completely believe that you have to do what you love in life or you just wont be happy.”