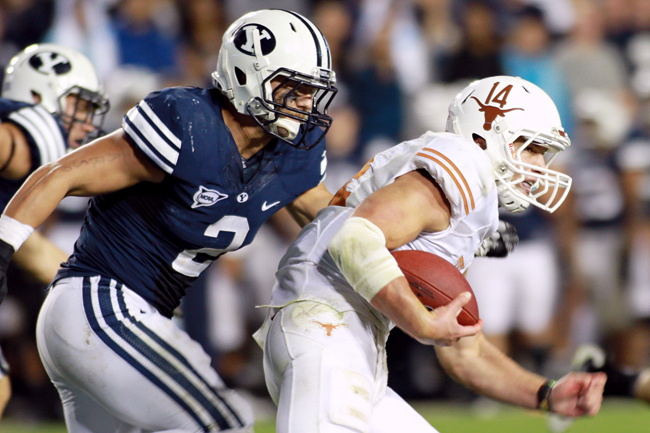 My view of Texas' embarrassing loss to BYU, plus the journey there, including monsoon-like rains, tailgating and airport security.

4:37 a.m. — Parked in lot A at Austin-Bergstrom — my first experience with this particular airport. Let it be known that although I enjoy the actual flight part of air travel, the process of getting to and from the airport and checking in are among my least favorite human experiences.
4:50 a.m. — Already in line for the TSA checkpoint. Once upon a time, people (including me) would dress somewhat nicely for an airline flight. Now that we have to disrobe at the gate, most people (including me) are in clothing more suitable for the gym. Airport security lets me and my two giant bags of camera equipment through with only a minimal invasion of my privacy.
5:05 a.m. — Sitting at the gate, a full hour before departure. There are a dozen or so Longhorn fans waiting for the same flight. Many of them are smiling, oblivious to what will come. I’m just happy I’m at my gate a half hour after parking. In Newark, N.J., the same process takes three hours.
5:46 a.m. — No, there is no time travel involved here. But flying to Salt Lake City from Austin via Phoenix means you travel through three time zones. So it’s actually 7:46 a.m. Austin time, but 6:46 a.m. in Utah. But here, at 5:46 a.m., the captain announces our descent into the 43rd level of hell, otherwise known as Phoenix Sky Harbor International Airport, where the length of a stopover is inversely proportional to the distance between gates. Today is one of those fortunate occasions in which I have an hour to walk 30 feet.

10:03 a.m. — The gate agent in Salt Lake City tells me the temperature outside is 72 degrees. I’m looking forward to sweating less for the next 24 hours or so.
11:35 a.m. — I pull into the parking lot at LaVell Edwards Stadium to pick up my pass, and there are maybe 100 people tailgating. Game time is 5 p.m. Five and a half hours before kickoff in Austin, there is a sea of orange for blocks around the stadium.
12:25 p.m. — With a few hours to kill, I find a place to sit and have lunch. This is a travelogue, so I don’t mind plugging a particular business here — particularly one with such phenomenal homemade tortillas and fresh seafood and veggies. So if you’re ever in the Greater Provo area, make sure you stop by El Azteca and treat yourself.
1:45 p.m. — Back to the stadium to get settled. This might be the most beautiful press box view in the nation.
2:15 p.m. — More folks are starting to gather now, but there is still no problem driving right up to the gates. At this point the burnt orange shirts are about the same in number as the blue, a few thousand each.
2:40 p.m. — The Longhorn bus arrives as players and staff enter the stadium. This is the happiest Mack Brown will be all day.
4:00 p.m. — One hour before game time, and the temperature and air pressure are dropping rapidly. From beyond the southern end of the stadium we hear faint rumbles of thunder, and soon the sky on that end is dark.
4:14 p.m. — The sky opens up and lets loose a storm, the likes of which many Texans have never seen. It rains more in an hour than it does in Austin in a year. The stands are evacuated and I huddle with the rest of the photographers in the work room.
5:48 p.m. — The UT coaches tell me they have “no idea” when the delay will end, but a stadium staff member assures me that, come hell or high water, the game will take place tonight because “there’s absolutely no way they’ll play a game here on Sunday. Nobody would come.”
6:00 p.m. — The rain has slowed enough for the warm-up clock to start, which gives us 50 minutes until kickoff. Having foolishly trusted the weather forecast and neglected to bring even a sweatshirt, let alone any rain gear for myself or my equipment, I am now busy taping plastic ponchos to all my gear and preparing to be hypothermic in a couple of hours.
6:50 p.m. — Kickoff, finally. The stadium is once again full.

3:21 remaining, first quarter — After three consecutive three-and-outs, David Ash hits Mike Davis for a 57-yard touchdown. 7-3 Longhorns.
2:17 remaining, first quarter — That lead lasts exactly three plays, as BYU quarterback Taysom Hill, who has never before been confused for Steve Young, breaks off a 68-yard touchdown run.
Second quarter — BYU averages a shade over 7 yards per snap and puts up 17 points, taking a 27-14 lead into the locker room and making this guy very happy:
Third quarter — BYU produces a touchdown and two field goals in three possessions. Texas scores once and punts twice. 40-21 Cougars and the 63,197 people in attendance are LOUD…
…while the UT spirit squad is dejected…
…and Mack Brown is perturbed.
8:42 remaining, fourth quarter — After David Ash leaves the game with an injury, the Case McCoy experiment begins. Not with a bang, or a whimper, but a 5-yard completion to Jaxon Shipley and eventually a turnover on downs.
11:14 p.m. — The final gun sounds on one of the more shocking losses for UT in recent memory. The Manny Diaz era would end a few hours later.
12:48 a.m. — I arrive back at my hotel and learn that the only restaurants open at this hour on a Saturday are Denny’s and a place called the vending machine. I choose the latter, for health reasons. Besides, I’m an adult. If I want to have Reese’s Pieces for dinner, I’m going to have Reese’s Pieces for dinner.
10:52 a.m. — After a slightly more involved check-in process than at the Austin airport, I am in my exit row seat with no seat in front of me. And a small person next to me. And lots of crabby faces in burnt orange.
4:17 p.m., Austin time — Within seconds of the pilot letting us know it’s OK to turn our cell phones back on, the news of Manny Diaz’s firing is announced from multiple locations. I’m just happy to be home.