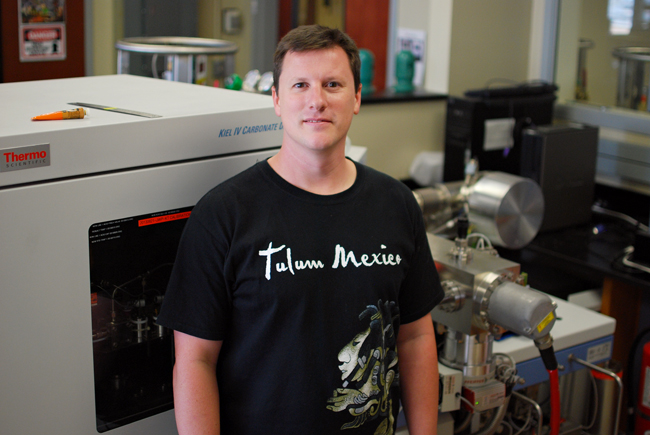 Thanks to a fast-growing stalagmite named Big Taurius, climate scientists now have a better understanding of rainfall patterns affecting nearly half the planet.

The stalagmite was discovered by UT researcher Dr. Jud Partin, who was joined by several researchers in UT’s Institute for Geophysics and published the results of his research in the Sept. 6 issue of “Geology.”  The study focused on rainfall patterns in the South Pacific Convergence Zone, which covers a vast portion of the Pacific Ocean and impacts the entire Pacific Basin, Partin said.

While previous studies were limited to rainfall measurements conducted beginning in the 1900’s, the new study incorporates data from as far back as 1560 from the island nation of Vanuatu in the South Pacific Ocean where the field research was conducted.

“The past is the key to understanding the future, not the present,” Partin said.

The study found greater variance in rainfall in the past, which current models fail to predict, suggesting possible shifts in the location of the South Pacific Convergence Zone, Partin said.

“This affects everything around the Pacific Ocean,” he said.

Recording precise rainfall using scientific instruments is a modern practice, and rainfall records dating back to the early 20th century are spotty, Partin said. Big Taurius, named for the Taurius Cave where the stalagmite was discovered, is what climate researchers refer to as a proxy.

Proxies, which include samples of coral, the discarded shells of plankton and stalagmites like Big Taurius, allow researchers to incorporate data from past eras. For this reason, Partin and his team of scientists are referred to as paleoclimatologists.

Dr. Terry Quinn, a co-author of the study and fellow researcher in the Institute for Geophysics, leads what he calls “team paleo,” a group of professors, Ph.D.’s and undergraduates who take a team approach to studying climate by unlocking the past.

The ultimate goal, Quinn said, is to answer a common question: What is normal weather?

“It’s easier to look at a time when we weren’t running the CO2 experiment,” he said.

Kaustubh Thirumalai, a graduate student in the school of geosciences, who worked on the study, echoed the value of using the past to understand the future.

“Looking into the past helps us understand where we may go,” Thirumalai said.