Texas falls to No. 25 Ole Miss as defense fails to stop running game 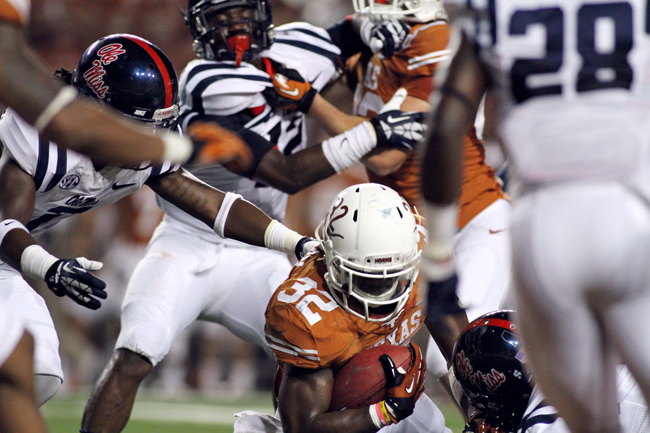 Chants of “SEC! SEC!” bellowed from the Ole Miss fans and filled Darrell K Royal-Texas Memorial Stadium as time wound down in the fourth quarter. Much of the Longhorns faithful departed well before the clock hit zero.

Texas struggled to maintain consistency on both sides of the ball for the second consecutive week en route to a 44-23 loss to the Rebels on Saturday, leaving the on-hand Longhorns’ fan base largely deflated. The players, too, felt disheartened, with head coach Mack Brown being the lone speaker in the locker room after the game.

“It was very quiet,” Brown said. “They were very disappointed.”

The Longhorns took a 23-17 lead into halftime but failed to replicate their first half success in the third and fourth quarters. The Rebels, on the other hand, exploded once play resumed, manufacturing touchdown drives on three of their first four possessions of the half while also scoring on a 73-yard punt return by senior running back Jeff Scott.

Conversely, the Texas offense was inept in the second half, going scoreless in the third and fourth quarters while managing just 90 yards of total offense. Senior quarterback Case McCoy played well early on in junior quarterback David Ash’s absence before struggling to move the ball after halftime, and he finished the game 24-for-36 for 196 yards and a touchdown.

After replacing defensive coordinator Manny Diaz with Greg Robinson following last week’s blowout loss against Brigham Young University, the Longhorns’ defense whiffed on stopping the run once again. The Rebels racked up 272 yards on the ground, with Scott leading the way with 164 yards and a touchdown.

While he admits the defense must play better moving forward, junior linebacker Jordan Hicks believes that the Texas players need time to get acclimated to Robinson’s new defensive scheme.

“We’re just trying to make the transition and learn as fast as possible,” Hicks said. “One thing we harped on this week is that we need to get to the ball and rally. I think we did a good job of that and we just need to keep improving.”

Robinson agreed, saying that he remains confident his players will turn things around and improve as a defense as the season progresses.

“I think we’ll continue to grow and get better,” Robinson said. “These are good young guys, and they want to win.”

Texas enters next week’s matchup against Kansas State with a chance to rebound as it kicks off Big 12 play. The Longhorns still expect to contend for a conference title, but this could be a tough goal to accomplish if they continue to struggle.