Texas still believes a Big 12 Championship is possible, but 5-7 is more likely 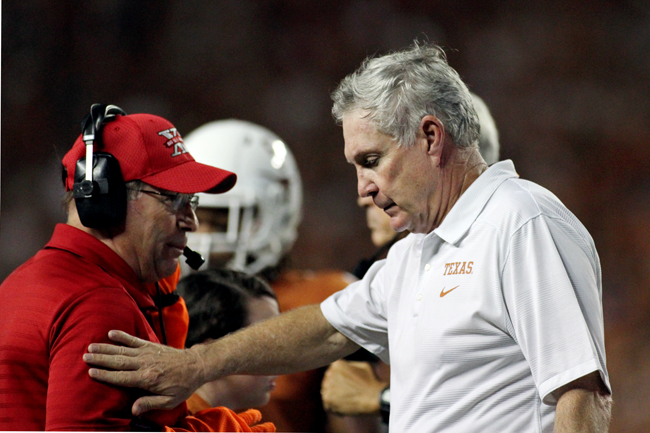 Effort, intensity and confidence were the words thrown around by the Texas players after the team’s 44-23 loss to Ole Miss on Saturday.

They weren’t in glowing praise, or even thoughtful responses to a question about what exactly is wrong. Instead, they were rehearsed keywords muttered by downtrodden players. Thoughts were gone, just an automatic deflection to a difficult question: How can you fix what’s broken when you’ve tried everything?

The players don’t seem to know — effort can only get you so far. They don’t have any more answers, and that was never clearer than on Saturday.

Texas played a solid first half of football. It fell down quickly, 14-0, but showed the resiliency to bounce back. The Longhorns entered the half with a six-point lead, and then things fell apart. The offense played a putrid second frame, and the defense cracked. This caused an unusual occurrence at Texas: a losing in-season record.

Texas is 1-2 under head coach Mack Brown for the first time since 1998, his first season in Austin. That year the Longhorns rebounded for a  9-3 campaign, losing to only Texas Tech by a possession late in the season. The players and coaches still believe this kind of turnaround is possible.

“All our goals are still in front of us,” senior safety Adrian Phillips said. “We have to be confident. If we’re not confident in winning the Big 12, you have no chance. The season is a loss.”

But you have to wonder about the group’s confidence. Texas’ senior leaders have never experienced a season that the program considers the norm. Actually, the team spent just as much time refuting the possibility of another 2010 disaster, when the Longhorns and this group of seniors spiraled to 5-7.

Senior Chris Whaley, one of the most passionate and intense players on the roster, was visibly upset after the loss.  The 6-foot-3-inch, 295-pound defensive tackle looked shaken and close to shedding a tear as he answered questions, but Whaley made it clear: “We refuse to have another 5-7 season.”

But how much stock can be put in that answer?

Texas’ schedule doesn’t get any easier from this point. The Longhorns have four remaining should-wins — Kansas State, Iowa State, West Virginia and Kansas — but outside of those games, who will Texas be expected to beat in the Big 12?

Oklahoma? Not a chance. Bob Stoops may lead another annihilation, perhaps planting Brown’s Texas tombstone at the same time.

Oklahoma State? The Cowboys may score 100 points against Texas.

Texas Tech? Not likely, even at home. Under Kliff Kingsbury, the Red Raiders have a swagger sorely lacking in Austin.

Baylor? If the Cowboys can score 100, the Bears can too.

The season is set up for disaster. It may not be 5-7, but a six-or-seven win season is realistic. Brown just wants you to remember one thing — it’s about the kids.

“Forget the coaches, come for the kids,” Brown said. “Come for the young guys who are really trying, and come watch them try to beat Kansas State.”