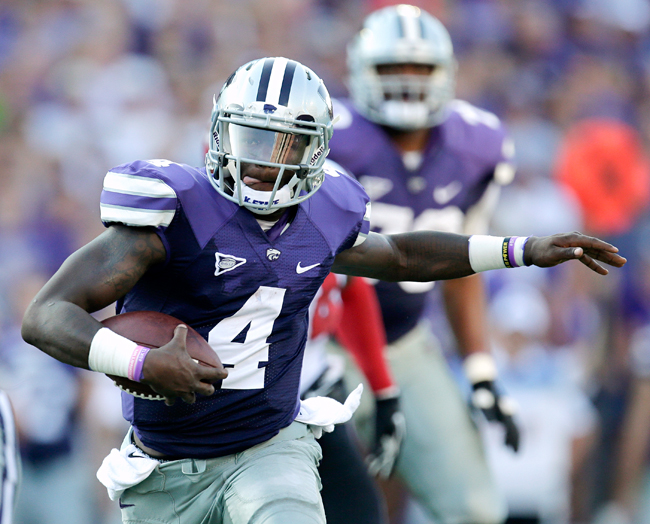 Kansas State's Daniel Sams has proven to be the type of player that has given Texas so many problems this year: a quarterback that can run. The Wildcats also have junior college transfer Jake Waters, a NJCAA champion last year, at their disposal.

As if one quarterback wouldn’t confuse Texas enough already, the Wildcats plan on using two
this weekend.

Junior Jake Waters and sophomore Daniel Sams will share the duties at quarterback this week at Texas, just as they have done all season. And they both like to run.

Up to this point, Waters has been the No. 1 guy while Sams has been the backup. However, with the way Texas has handled the run, many expect to see a whole lot more of Sams than in past weeks.

No one knows how Kansas State will use them this weekend, not even their head coach.

“There are certain things that you would like to be able to do, and you have a plan in place, but that will be dictated by the University of Texas as much as anything,” Bill Snyder said. “Any opponent has the ability to take away what they want to take away and force you to do some other things. So how we utilize each of the two quarterbacks is dependent on what the University of Texas does.”

The Texas defense couldn’t stop a junior college transfer last week. But it can redeem themselves this week.

While at Iowa Western Community College, Waters threw for 39 touchdowns with just three interceptions while breaking Cam Newton’s NJCAA record for completion percentage his sophomore year, so like Wallace and Newton, he moved up to FBS.

But in his first year playing against better competition, it hasn’t been smooth sailing, as he has thrown five picks in three games.

“The defenses are just a lot better from top to bottom,” Waters said. “You have got your pick of who you want to throw to in JUCO but here you cannot force stuff and make a play every single time.”

Waters’ problem with forcing things has been his only real problem thus far, though.

“I think he has played well with the exception of five interceptions,” Snyder said. “Those things were very, very costly.”

Excluding those five interceptions, he has been extremely productive, completing 68.6 percent of his passes. While Waters is mainly a passing quarterback, he is a sneaky runner.

“Waters is an underrated runner,” Snyder said after Waters ran for 74 yards against UMass last week. But most importantly for Kansas State, Waters has accepted and embraced the two-quarterback system.

“[Snyder] has been pushing all of the right buttons so far with us,” Waters said. “We are ready every play whether he is calling my number or Daniel [Sams]’ number. Coach Snyder knows what it takes to win and we are all for it. I am cheering for Daniel when he is out there and he is cheering for me, so it is good and it is working so far.”

In the two-quarterback system Snyder is using, Sams has only attempted four passes, mostly serving as the backup to Jake Waters.

But he does have 21 rushing attempts and, with the trouble Texas has had stopping the run, Sams will certainly get his fair share of touches.

Even Mack Brown knows that they will have to stop Sams and the running game that he brings.

“Kansas State will run the option,” Brown said. “I told our defense this morning, if they didn’t run it, they’ll put it in.  My gosh, we got to stop it.  It’s just obvious.”

And the Slidell, La. native is excited for the opportunity, one he didn’t have last year sitting behind Heisman finalist Collin Klein.

But when he steps on the field Saturday night, Sams knows that the defense will be focused on him.

“I get excited, but at the same time, Texas knows what we do as a team,” Sams. “They know we are running the quarterback run game.”