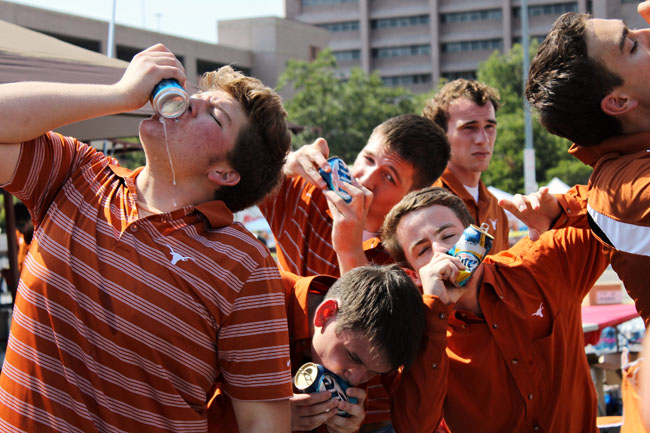 Members of the Pi Kappa Alpha Fraternity shotgun beer while tailgating before the UT versus New Mexico football game. Austin Police usually stay out of the parking lots, despite the potential for underage drinking. " />

Members of the Pi Kappa Alpha Fraternity shotgun beer while tailgating before the UT versus New Mexico football game. Austin Police usually stay out of the parking lots, despite the potential for underage drinking.

Despite the presence of alcohol and the potential for underage drinking at tailgating events, Austin police say they generally stay out of the parking lots on game day.

Tailgating spots on state-owned property require a reservation and a fee. Centennial Park, which is located along Trinity and 15th streets, is the only regulated grass space on campus that requires a reservation and permit.

Lt. Derek Galloway said the Austin Police Department is swamped during home games and his department does not monitor tailgaters inside the lot.

“I do not think APD monitors the tailgaters very much,” Galloway said in an email. “Most of them are UTPD areas and we are usually stretched thin with call load before, during and after a home game.”

Lt. Keith Walker, who oversees DWI enforcement, said his unit does not monitor the football-fueled festivities.

“Our unit, DWI enforcement, [aren’t] the ones who would monitor parking lots,” Walker said. “Those areas that aren’t [monitored by] UTPD would primarily be handled by Region
1 patrol.”

Scott Hume, a business graduate student and president of the Texas Wranglers, said his organization hosts a tailgating event in the parking lot of the Bullock Texas State History Museum for every
home game.

Hume said he’s aware of the possibility for underage drinking, but maintained that the tailgate environment is safe for everyone.

“The cops are lenient in the lots,” Hume said. “No one’s driving and no one can take an open container off the lot.”

Briana Denham, a radio-television-film senior and member of Texas Sweethearts, said third-party security helps distribute wristbands to students who are of age. However, Denham said minors like to drink prior to tailgating.

“I think the third party that our spirit guy groups have are a great way to limit the risk of minors drinking,” Denham said. “If a person wants to consume alcohol prior to the tailgates, there isn’t a whole lot anyone can do.”

Denham said her organization tries to keep tailgate attendants hydrated. In the event that someone has one too many drinks, Denham said, the Sweethearts make sure to get them
back home.

“We always encourage the people at our tailgates to stay hydrated and make sure that they limit the amount they drink due to the high temperatures,” Denham said. “I have seen several people in [the] area surrounding our tailgate get very sick due to dehydration. The safety of our members is the main priority in any situation.”