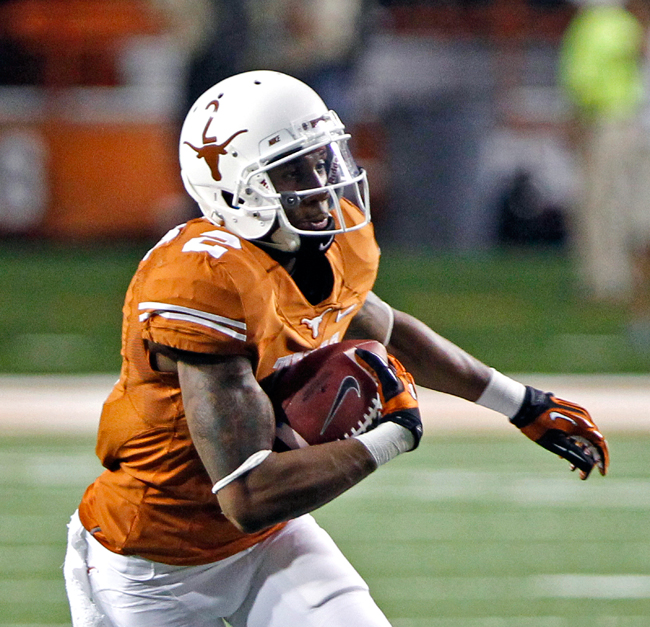 Sophomore wide receiver Kendall Sanders didn't do much as a freshman but, after serving a one-game suspension for an offseason arrest, is proving to be a crucial part of the Longhorns offense. Texas will need a big game from him this week against Kansas State, especially with Daje Johnson out and Mike Davis possibly missing the game as well.

Last June, wide receiver Kendall Sanders received word that he would play one less game than most of the rest of his Longhorns teammates this season.

After being arrested and charged with driving while intoxicated in April, Sanders was suspended for the season opener against New Mexico State, placing the sophomore in a challenge to catch up to his teammates.

The Athens native is stepping up to that challenge.

“We’re excited about him [Sander], what he is doing,” head coach Mack Brown said. “[He is a] big, strong guy with the ball in his hands.”

As a freshman, Sanders played in 11 games as a backup wideout. He caught two passes for a total of 15 yards.

As a sophomore, however, Sanders has already surpassed his first-year accomplishments. The 6-foot receiver has 91 yards off 11 receptions in his first two games, well on his way toward having a breakout season.

“He’s an extremely good player,” fellow wide receiver Jaxon Shipley said. “He’s got a lot of intangibles. He’s an extremely fast guy. He’s got long arms and can jump really high. He’ll go get the ball and attack it.”

Sanders’ appeal stems from his versatility and ability to do make things happen after he catches the ball. He is currently one of the team’s leaders in kick returns. Against Ole Miss, the receiver returned one of his four returns on the year for 51 yards, bring his season total to 108 yards so far. Other than that, Sanders, who says his favorite TV show is The Fresh Prince of Bel-Air, is always a part of the play giving 100 percent.

“[He is] not just catching the ball but blocking and effort outside,” co-offensive coordinator Major Applewhite said. “Obviously his ability to run after the catch too. Whether it be a screen or play-action pass, he does a great job of running after the catch.”

Sanders’ teammates added to that praise.

“He’s going to give 100 percent every play,” Shipley said. “If he doesn’t have the ball he’s always blocking and doing the best job he can.”

Texas lost its star running back and wide receiver when Daje Johnson left the Longhorns’ loss to BYU earlier this month. In addition, Mike Davis was injured in last weekend’s game against Ole Miss, which proved a chance for Sanders to step up in their places.

Sanders’ ability to play where needed and ability to give a full effort has given him applause from those around him.

“I respect Kendall a lot,” Shipley said. “Him being a guys who has stepped into the role of outside receiver, he’s stepping up and making plays. I think he’s earned the respect of a lot of guys on the team.”