Texas women’s gymnastics continues to do the impossible 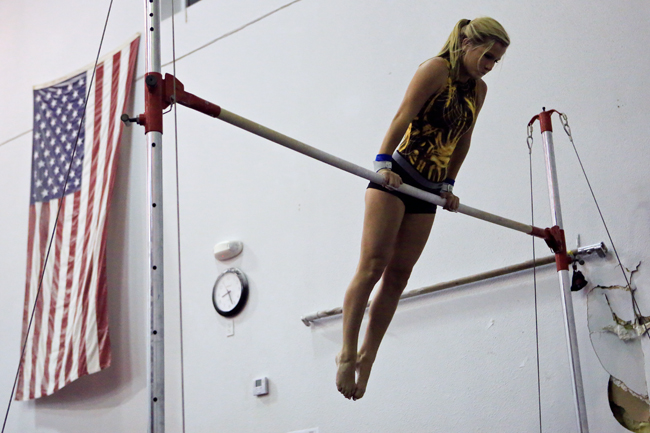 And a balance beam? About 4 inches — which probably feels smaller if someone has to flip backward and land perfectly back on the beam.

The members of the UT women’s gymnastics team do this every day, not only managing to re-plant their feet firmly on the beam, but doing it with ease and grace.

“I think it speaks a lot to a gymnast’s character that they do the impossible,” said Rachel Zarosky, math senior and team president. “People don’t understand what it takes to be a gymnast.”

The balance beam is only one of four events where gymnasts “do the impossible.” The other events of women’s gymnastics include floor exercise, vault and uneven bars. Each is different with its own set of skill requirements, yet all of them carry the risk of serious injury.

Team captain Laurita Vargas has fought through two ACL injuries from tumbling on the floor and riding her bike. Despite being on the team for three years, this is the first year Vargas will actually get the chance to compete.

Most injuries come from instantaneous, identifiable accidents, such as Vargas’. But some injuries, such as team treasurer and biology junior Sara Journeay’s injury, come simply from the repeated pounding and joint stress that go with the sport.

“I had elbow surgery and ankle surgery,” Journeay said. “I frayed my ligaments from overuse, and I broke off a piece of cartilage in my ankle they had to take out.”

According to the American College of Emergency Physicians, the annual injury rate of gymnasts is on par with rates reported from contact sports such as hockey, soccer and basketball.

Despite these high rates of injuries, Texas gymnastics continues to draw people back.

“I think a lot of gymnasts will tell you, you spend so much time in the gym, it just kind of is your life,” Journeay said. “So when you stop doing it, you just kind of lose your sense of identity for a while.”

Although gymnastics is mainly an individual sport, the team component is important for the squad.

“I belong here with these people and they accept me and they love me,” Journeay said. “I love coming to [the] gym and I couldn’t imagine being with anyone else.”

Although skills and experiences may vary, one thing remains constant across the team members: their passion for the sport and each other.

“We don’t win all the time, but I think that we probably have the most fun at meets,” Vargas said. “I could not be more grateful to have a team like this.”