Get weird with CyberFest 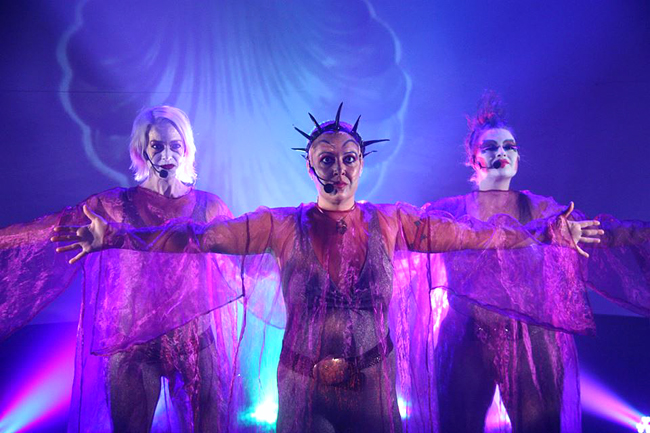 By most standards, Austin is not that weird. Food trailers, graffiti parks and music festivals do, in fact, exist in other cities. But CyberFest, on the other hand, is in a category of its own.

CyberFest is a medley of cyberopera, sci-fi- and fantasy-genre operas, songs composed over the last 25 years by Austin composer Chad Salvata that proves anything goes in this fair city. The show is presented by local performance company Ethos, which premieres twisted and quirky original theatre pieces.

Long story short, this thing is weird. The night kicks off with a woman wearing a bodysuit with the breasts cut out, singing and seductively touching the faces of audience members.

All right. This show’s going to have some boobs.

On the whole, CyberFest is a science fiction house rave attended by one’s deepest fantasies and nightmares alike. The show is billed as an “audio-visual immersion” but feels more like an audio-visual assault. Electronic music is blaring, singers are snarling and touching the audience and dry-ice machines are full speed ahead.

The costuming blends sci-fi tropes with the homespun calculation of a fourth grade musical where everyone had to bring their own clothes from home. Exposed chests are as plentiful as the steam-punk goggles. Spandex clings to both male and female forms. The characters of Salvata’s worlds range from a laughable leather-clad imp seduced into a robotic dance frenzy to a giant spider-like creature called the Octax, whose poisonous, pointy black tentacles will no doubt haunt post-CyberFest dreams.

Although the show is truly bizarre, it’s a barrel of fun to watch. The audience was not afraid to laugh, hoot and holler as the Vortex stage is overrun with demons, sorcerers and that freaky Octax. The performers’ enthusiasm is as infectious as the bumping synth music they’re singing along to.

Each song follows a similar structure: eerie electronic buildup into a repetitive, contagious chorus explaining the general idea of every song. My date from that night is still serenading me with choice lines like “I am the Octax” and “You are the center of heaven.”

It’s easy to dismiss these hidden worlds of cyberpunk lore as nerdy and lame. But to do so dismisses the geyser of guilty pleasure fantasy that is Ethos’ work. I don’t know others who attended Cyberfest, but I’ve never seen a bustier fabricated out of black and red claws — or at least seen one that doesn’t look like total crap.

CyberFest offers teasing glimpses into eight different cyberoperas that share worlds and characters, leaving you wondering what the hell these stories are really about. Is the Octax related to Earth’s spider? Why can’t she keep her cone hands off that poor Frigg? And who is this white centipede she claims to have swam with?

Those that deem themselves too cool for school will not enjoy this venture into the many dimensions of cyber fantasy. But those who can laugh at a synth player dressed as a space samurai and laugh at themselves for paying $10 to see him, then this is the show to be at.