Soccer season ramps up with start of Big 12 schedule 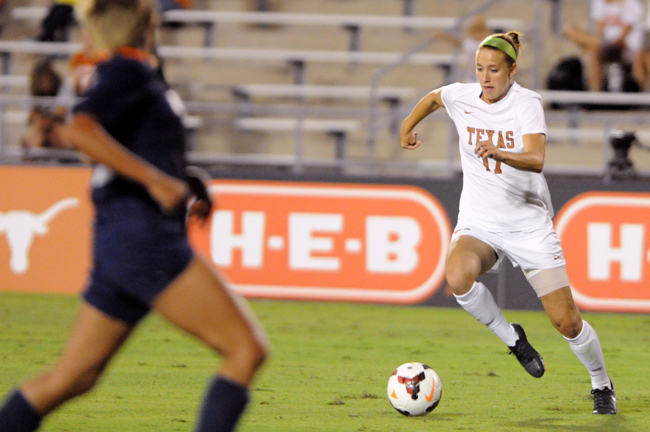 Kelsey Schimmick at the UT versus UTSA game September 23.

The Longhorns ran through their non-conference schedule with relative ease, but things are about to change when TCU and Iowa State come to Austin this weekend to open the Big 12 slate.

Texas compiled a 6-3-1 record and 17 goals through 10 games, but the level of competition is going to be more difficult
in conference.

The Longhorns enter the conference schedule looking to improve on last season — where they fell one game short of the Big 12 championship game, losing to TCU in a penalty shoot-out in the semifinals. Texas finished the season at 8-10-2 overall and held a 4-4 record in the
Big 12.

“We had an opportunity in that game to put it away and we didn’t,” Kelly said.

So far this season, the Longhorns appear to be directing themselves toward a stronger finish.

The team has already almost matched its win total from last season, has netted nearly two-thirds the goals and out-shot its opponents in all but one match.

Sophomore forward Kelsey Shimmick and junior defender Brooke Gilbert lead with four goals each, with six other players scoring so far this season, just one fewer than in 2012.

Coach Kelly said a versatile attacking unit is key for the team’s success.

“That makes it very hard to defend,” Kelly said. “It’s not very predictable when one of our top leading scorers is our center back.”

The Longhorns rank near the top in both goals and shots on goal in the Big 12, but Baylor, Texas Tech and West Virginia enter the conference schedule ranked in the Top 25 of the National Soccer Coaches Association of America standings. Texas went 0-3 against the trio
last year.

Shimmick said the challenge will be to add variety to the offense, but still make the attack familiar.

“Everyone is looking at what you’re doing, so you have to mix it up,” Shimmick said. “But when we play how we’re used to and able to, we do great things.”

The Longhorns’ schedule will begin with a rematch of the Big 12 semis against TCU Friday. The Horned Frogs swept the teams’ two matchups last season, but one of the Longhorns’ goals this season is to protect their home field.

“[We want] to continue to maintain home-field advantage and
defend our home turf,”
Kelly said.

With a 5-0-1 record at home so far in 2013, Texas has already totaled the number of home wins from last season, in which it finished at just 5-5-1 while only managing two Big 12 home wins.

A Big 12 championship won’t be easy, but the Longhorns are ready to rebound from last season.

“We got close to winning it last year and I think this year we have an even better chance,”
Shimmick said.